Six people are in critical condition after a collision between two Light Rail Transit (LRT) trains in Kuala Lumpur on Monday evening, with preliminary reports indicating that a human error had led to the incident, sending dozens to hospital.

"It was due to the mistake by the person driving the train in the wrong direction," Transport Minister Wee Ka Siong said in a virtual news conference yesterday.

He said early reports from the Land Public Transport Agency indicated that the hostler, or driver, of an empty train on a test run heading towards a depot had manually driven it in the wrong direction, after the train timed out at a station stop and could no longer be automatically operated.

This, he said, caused it to collide with an automated train that was ferrying 213 passengers.

Datuk Seri Wee said both trains were initially heading in the same direction, when Train 40, which was empty and was ahead, stalled at a station, causing the hostler to manually operate the train.

He said Train 40 was manually driven by the hostler because the automatic system in the coach was found to be faulty.

"The driver was then ordered to manually drive the coach from the Kampung Baru station towards the Dang Wangi station."

But instead of continuing the journey southwards, the hostler sent the train northwards, causing it to collide with the other train, which was southbound, he said.

Dr Wee said 64 individuals are receiving treatment in hospital, with six of them in critical condition.

"Another 15 are partially critical," Dr Wee said, without giving details.

Forty-seven were seriously injured and 166 were lightly injured.

An investigation committee headed by top civil servants from the Transport Ministry and experts from the rail industry will be formed in the aftermath of the crash, the minister said.

Prime Minister Muhyiddin Yassin on Monday called for a probe into the accident by the ministry and train operator Prasarana Malaysia, and urged that "stern action be taken".

Prasarana has said it will bear the medical costs of all the victims of the crash, and had also said every person on the train will receive RM1,000 (S$320) in compensation.

"Prasarana will also bear the living costs for anyone who loses his income as a result of this accident," Dr Wee said yesterday.

The accident is the first crash involving the LRT in its 23-year service since the Kelana Jaya rail line was opened in 1998.

The Kelana Jaya LRT line is Malaysia's busiest rail line and is one of several train systems that serve capital city Kuala Lumpur and the neighbouring Selangor districts. 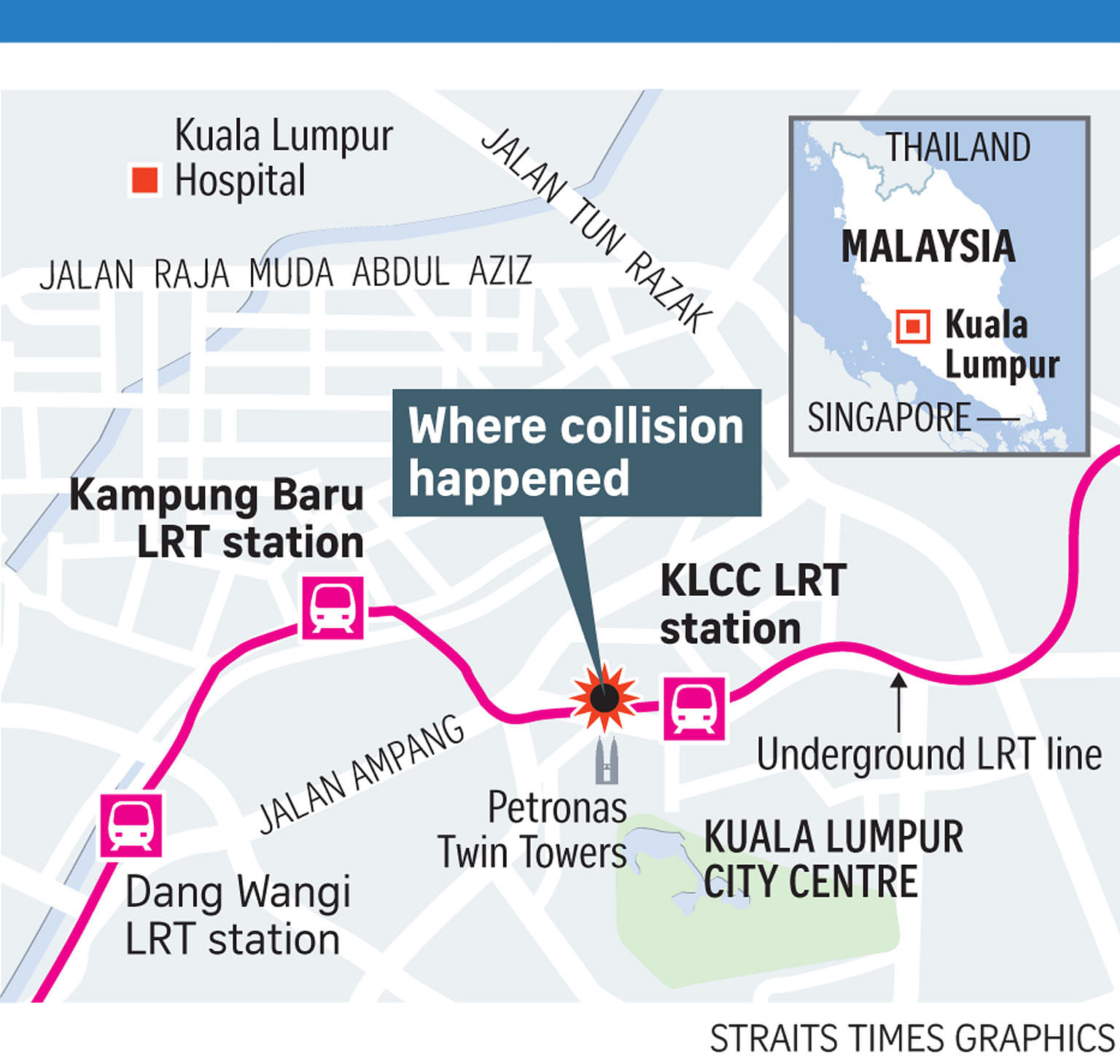 The crash occurred in an underground tunnel near the Kampung Baru station, a short distance away from the neighbouring station at the Kuala Lumpur City Centre that anchors the Petronas Twin Towers.

Rail services, including the LRT, from yesterday reduced passenger capacity by half and also lowered train frequency to discourage people from moving around. But this has caused passenger congestion at the stations of most train systems.

The country is entering the third week of a month-long third lockdown following the worst wave of the coronavirus, which has seen a record number of infections, deaths and admissions in critical wards, which are in short supply.

A version of this article appeared in the print edition of The Straits Times on May 26, 2021, with the headline 'LRT crash in KL: Train was driven in wrong direction'. Subscribe
Topics:
More
Whatsapp Linkedin FB Messenger Telegram Reddit WeChat Pinterest Print Purchase Article Copy permalink