JAKARTA - The Indonesian authorities have wrapped up the identification process of the victims of the crashed Lion Air plane.

"There are still 64 victims that have not been identified," Arthur said at the Kramat Jati Police Hospital on Friday (Nov 23).

The Lion Air aircraft crashed in the waters of Tanjung Pakis, Karawang, West Java, on Oct 29, killing all 189 passengers and crew members on board.

During the 13-day search, the National Search and Rescue Agency (Basarnas) recovered 666 body parts, which were then examined by the Disaster Victim Identification team for identification, Tempo reported.

It was suspected that the victims could not be identified as the bodies remained missing, thus Lion Air planned to resume the search, according to Tempo.

"There are indications of a re-search. We will be coordinating with the Basarnas head," Daniel Putut Kuncoro, the managing director of Lion Group, said at Kramat Jati Police Hospital.

The head of the DNA Laboratory of the Medical and Health Center of the National Police, Sr Commdander Putut Cahyo Widodo, said although the search had been discontinued his team was set to render assistance should more bodies of victims be found. 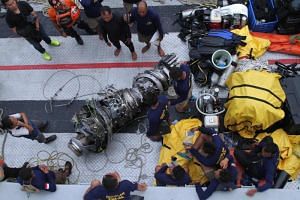 "It's just that the identification process will be longer. Because the bodies must have been decayed," he said.

According to AFP news agency, a preliminary report on the cause of the accident is due next week.

The smashed jet's flight data recorder was recovered but divers are still looking for the cockpit voice recorder. A formal preliminary report on what might have caused the crash is due next Wednesday (Nov 28).

So far, investigators have said the doomed plane had problems with its air-speed indicator and angle of attack (AOA) sensors prompting Boeing to issue a special bulletin directing operators what to do when they face the same situation. An AOA sensor provides data about the angle at which wind is passing over the wings and tells pilots how much lift a plane is getting. The information can be critical in preventing the plane from stalling.

Last week, a US airline pilots union, the APA, said that companies and pilots had not been informed by Boeing of certain changes in the aircraft control system.

While Boeing has come under fire for possible glitches in its newest 737 model - released just last year - the accident has also resurrected concerns about Indonesia's poor air safety record, which until recently saw its carriers facing years-long bans from entering European Union and US airspace.