KUALA LUMPUR (THE STAR/ASIA NEWS NETWORK) - An article on the Malaysiakini news portal which reported that Democratic Action Party (DAP) leader Lim Guan Eng had described the pact between Malaysian opposition parties Umno and PAS as a declaration of war against non-Malays has riled up the Malay Chinese Association (MCA).

"Never before in Malaysia's history has a politician made an inflammatory statement like Lim Guan Eng, who said that the cooperation between Umno and PAS is a declaration of war among the races," said Dr Wee, who is also Ayer Hitam MP.

In the Malaysiakini article, Mr Lim was quoted as calling the Umno-PAS union a declaration of "war" on non-Malays, adding that the 1Malaysia concept previously championed by Barisan Nasional is now over.

"You (Lim) have also indirectly invited the opponent to act on this 'declaration of war'. I cannot imagine the implications if (Lim) Guan Eng does not retract his statement and issue a public apology," said Dr Wee in a Facebook post on Wednesday (March 6).

Dr Wee reminded Mr Lim, the DAP secretary-general, that the latter's party and PAS had also cooperated in the past. 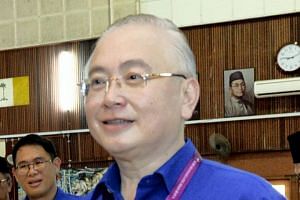 Barisan's fate to be discussed this week, says Wee Ka Siong, as he stresses MCA rebranding

"In fact, they were together in forming the Selangor state government for two terms. But now, PAS has chosen a new political partner. One can condemn the Umno-PAS cooperation, but certainly not to issue such an inflammatory statement that stokes racial discord. Be a responsible politician," said Dr Wee.

In the Malaysiakini article, Mr Lim had also said the flirtation between Umno and PAS was over, adding: "Now they are targeting the non-Malays and non-Muslims under the banner of 'Malay unity'."

Mr Lim also said that Umno and PAS were repeating the line that the government was controlled by non-Malays and non-Muslims as an example of both parties' alleged attempts to sow discord among different ethnic groups.