KUALA LUMPUR (THE STAR/ASIA NEWS NETWORK) - The next spotlight for the 1Malaysia Development Berhad (1MDB) saga will be the intense battle of the legal eagles.

Top-notch lawyers are being recruited by the parties involved as Prime Minister Mahathir Mohamad pushes the controversy further by telling the New York Times in an interview last Thursday that "enough evidence" has been gathered to charge former premier Najib Razak and his wife Rosmah Mansor.

The government has recently appointed Mr Tommy Thomas as the Attorney-General - he was given the job with the 1MDB case in mind.

With over 40 years experience as a corporate and commercial lawyer, as well as being involved in landmark cases on corporate debts and asset recovery, such as acting for the Securities Commission against Swisscash, a worldwide Ponzi scheme that was hatched in Malaysia, Mr Thomas is seen by many as the right man for the job.

Tan Sri Abdul Gani is believed to have been removed from his post in 2015 as he was preparing to charge Datuk Seri Najib.

Mr Abdul Gani has also led a seven-member panel in the case involving 30 individuals facing charges of waging war against the Malaysian King and various terrorism activities in Lahad Datu, Sabah, in February 2013. 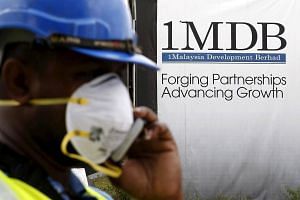 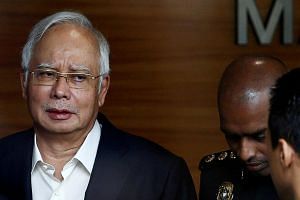 As for Mr Najib, several lawyers have come and gone in the past few weeks but the former prime minister has assembled a formidable US-based legal team, led by former US attorney-general John Ashcroft, who served under the George W. Bush administration from 2001 to 2005.

FARA requires agents represen­ting the interests of foreign powers to disclose their relationship with the foreign government and information about related activities and finances.

In a search, Mr Najib's name appeared on the FARA register as a "foreign principal", with Ashcroft Law Firm named as the "registrant" in two exhibits dated March 28 and 29 this year.

The document also disclosed that the services provided by Ashcroft Law Firm was financed by a "foreign government, foreign political party, or other foreign principal".

Ashcroft is known for handling high-profile international cases involving global players, including representing the government of Qatar to rebut accusations from US President Donald Trump and its Arab neighbours that it supports terrorism, as reported by Reuters.

According to Reuters' sources, another US lawyer in the team is star litigator David Boies, who specialises in anti-trust cases, including acting for the US government in its case against IT giant Microsoft and aided fallen financiers that inclu­ded AIG's Hank Greenberg and Enron's Andy Fastow.

Mr Schwartz, who is in private practice now, was named Prosecutor of the Year by Federal Law Enforce­ment Foundation in 2013.

They accompanied Madam Rosmah while she was questioned by the Malay­sian Anti-Corruption Commission (MACC) earlier this month.

Mr Kumaraendran is experienced in cases involving cheating and bribery, including representing a "Tan Sri" in connection with an alleged RM2 million bribe offer to the Sultan of Johor, as well as a senior lawyer who was charged in the Sessions Court here with cheating and embezzling his client's money over a RM9.05 million land deal.

Geethan is known for representing former Kuala Lumpur CID chief Ku Chin Wah, who was charged and later acquitted of allegedly failing to declare all his sources of income five years ago.

As for Low Taek Jho - the central figure wanted over the 1MDB investigations - he has surrounded himself with lawyers although his legal team has not been made known yet.

However, he has engaged the services of US and English lawyer Robin Rathmell as a spokesman.