VIENTIANE (VIENTIANE TIMES/ASIA NEWS NETWORK) - The Lao government will work with the countries whose companies are stakeholders in the Xe-Pian Xe-Namnoy hydropower project to investigate the cause of the collapse of the project's saddle dam, Prime Minister Thongloun Sisoulith announced on Sunday (July 29).

The collapse of the dam flooded many villages in Sanamxay district, Attapeu province. Official media reported last Thursday that 27 people were confirmed dead, 131 were missing. Thousands more have been left homeless.

Thongloun pledged a thorough investigation into the cause of the collapse, saying it would take place in a transparent and just manner.

"The government of the Lao PDR will cooperate with the governments of countries whose companies have been registered (as stakeholders) to address this issue," he said while visiting the Ministry of Labour and Social Welfare to witness the donation of relief supplies.

"The government of Laos will investigate intensively to find out the true cause."

The design, construction contractor and consulting companies will also be investigated, he added.

"The government will also look into the responsibilities of the authorities," the premier told officials and media present at the ministry.

All of the investigations will take place in a "transparent and just manner," the prime minister said.

Thongloun told media last week that the newly established National Ad Hoc Committee in charge of dealing with the disaster will work with the project developers to seek common ground concerning the responsibilities and obligations of the party whose actions were deemed to have caused the tragedy. 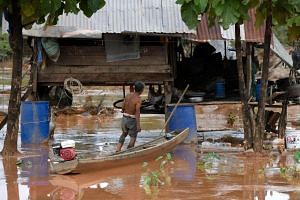 Minister of Energy and Mines Khammany Inthirath told a press conference last week that the company concerned would not be in a position to deny its responsibility for the deadly flood, the biggest to occur in Laos.

"Regarding the matter of compensation, I would like to affirm that, based on the concession agreement, all incidents related to the construction of the dam must be borne by the project developer 100 percent," he said.

An official from the Xe-Pian Xe-Namnoy Power Company agreed that the firm would take full responsibility under the law and its concession agreement.

Thongloun pledged that the government, with support and assistance from all sectors, friendly countries and international organizations, would do its utmost to search for and rescue all those still missing.

The government will also do its best to provide relief assistance and rehabilitate those who had lost houses and other property as well as rebuilding their communities to enable them to return to a normal life.

Representing the Lao government and people, he expressed heartfelt gratitude to the Lao people, all sectors, the governments and peoples of friendly countries as well as international organizations for all the valuable assistance and support extended in the search, rescue and relief effort.