ATTAPEU, LAOS (BLOOMBERG, AGENCE FRANCE-PRESSE, REUTERS) - Rescuers recovered 26 bodies and over a hundred remain missing after a dam collapse swamped several villages in southern Laos, as survivors Wednesday (July 25) questioned why they got little warning of the deluge.

Two South Korean contractors said they reported damage a day before parts of the Xe-Namnoy dam gave way Monday and unleashed a wall of water.

The prime minister of communist Laos on Wednesday said 131 people had been “reported missing” following the dam's collapse.

“All of the missing are Lao nationals,” Mr Thongloun Sisoulith told a televised press conference, giving his first public update on the disaster.

A Thai consular official, Chana Miencharoen, at the scene of the relief effort in Attapeu province told AFP that by Wednesday late afternoon 26 bodies had been recovered.

"Seventeen others are injured and in hospital," he said, adding roof-level floodwater was hampering rescue efforts in a remote area of the poor, landlocked Southeast Asian country.

Rescuers were racing against time on Wednesday to search for those missing as flood waters continued to rise.

Footage on Laos television showed people huddled on roofs awaiting rescue as muddy water swirled menacingly just below them.  Questions began to emerge over the collapse, with some of the displaced saying they were warned to evacuate homes only hours before disaster struck.

“It happened quickly, we had little time to prepare ourselves,” Joo Hinla, 68, from one of the worst-hit villages of Ban Hin Lath, told AFP from a warehouse crammed with over 700 displaced people in a neighbouring province.

“All of the houses in my village are under water. Four of my family are missing, we don’t know about their fate yet.”

Satellite time lapse showing the filling of Xe-Pian Xe-Namnoy #Laosdam until July 17 (6 days before the collapse). Made from @CopernicusEU Sentinel-1 data in the @sentinel_hub #igarss2018 pic.twitter.com/NVYyYChMuq

Hundreds of other displaced people, including women, children and the elderly, sat on the floor nearby surrounded by plastic bags crammed with meagre belongings.

The damming of Laos

Laos, poor but blessed with abundant natural resources, aims to become the “Battery of Asia” allowing dozens of foreign-funded dam projects across its network of rivers.

But fears over the environmental impact of the projects, which export most of their electricity to neighbouring Thailand and China, go virtually unvoiced inside the tightly controlled communist country.

Villagers across the country have been moved, some several times, to make way for dams whose benefits are mainly enjoyed outside of the country, campaigners say.  Once complete, around 90 per cent of the electricity generated by the Xe-Namnoy dam was destined for Thailand.

The remote flooded area is only accessible by helicopter and flat-bottomed boats, with roads badly damaged or completely washed away.  Rescue officials in neighbouring Thailand were reportedly stuck at the border because Laotians were sluggish in allowing access to the country. 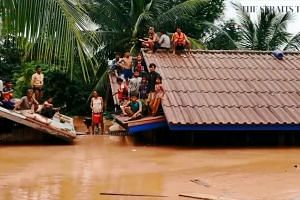 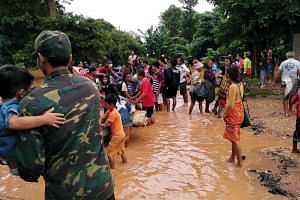 South Korea was sending a relief team to the area, President Moon Jae-in’s spokesman said Wednesday in Seoul.  “Although we are still determining the cause of the dam accident, our government must actively take part in on-site relief efforts without delay as our companies were involved in the construction of the dam,” Moon was quoted as saying.

Employees of SK Engineering and Construction found the dam - part of a network of two main dams and five subsidiary dams under construction on a Mekong River tributary - partially washed out at 9pm on Sunday, the company said in a statement, and notified the authorities.

Thailand's state-owned enterprise Ratchaburi Electricity Generating Holding, the Thai stakeholder in the US$1 billion hydropower project, said that the dam was fractured after continuous rainstorms caused a high volume of water to flow into the project's reservoir.

An official from SK Engineering said the area had been hit by heavy rainfall three times greater than normal, reported Yonhap news agency.

Engineers struggled for almost 24 hours to try and prevent the inundation, according to the South Korean firm.

But efforts by SK Engineering to bring in heavy equipment for repairs overnight were delayed as heavy rain had damaged roads to the site. By 3am on Monday, an emergency valve at one of the main dams was opened to lower water levels, the company said.

By noon on Monday, Laos authorities began evacuations, according to SK Engineering.

Water started to overflow at around 6pm on Monday.

Two hours later, the dam gave way, releasing about five billion cubic metres of water and washing away homes in the Laos province of Attapeu, near the border with Vietnam and Cambodia.

But news of the tragedy in the remote part of land-locked Laos, one of Asia's poorest countries, reached Bangkok only the next day, according to The Nation newspaper.

Moderate and heavy rain with strong winds are forecast for some areas in central and southern provinces in the coming days, which could worsen the situation, the Meteorology and Hydrology Department warned.

The Laotian government on Tuesday declared the flooded area an emergency disaster zone.

The United Nations said on Tuesday that it stands ready to support rescue and relief efforts if the authorities in Laos request assistance. The damage to the dam adds to the previous destruction caused by the tropical storm Son Tinh, UN spokesman Stephane Dujarric said in a statement.

Local authorities have appealed to government bodies and other communities to provide emergency aid such as clothing, food, drinking water and medicine.

Many areas of Laos have recently been hit by floods from heavy monsoon rain.

SK Engineering and Construction says that the site is surrounded by dense forest, which affects communication and complicates rescue efforts.

The company's president Ahn Jae-hyun and senior company officials have left for Laos to figure out the scope of the damage caused by the flood and to support rescue operations there. It has sent in helicopters from Thailand to help rescue those who have been stranded.

The collapsed dam, which was 90 per cent completed, was part of a billion-dollar hydropower project that the Laotian government sees as critical for economic development.

Opponents argued that the risks to local people and to fisheries did not justify the economic benefits.

The 410MW-capacity plant is designed to generate electricity from the water of three rivers, which all ultimately flow into the Mekong.

According to a Ratchaburi announcement in 2013 when construction began, 90 per cent of the electricity generated, or 370MW, was to be sent to Thailand when operation begins next year.

Under the terms of construction, PNPC said it would operate and manage the power project for 27 years after commercial operations began.

While Western countries have been reluctant to fund the dams due to environmental concerns such as the impact on fish migration on the Mekong River, companies from countries such as Thailand, Malaysia, China and South Korea have been investing in the projects, according to Nikkei Asian Review.