LANGKAWI (BERNAMA) - The operator of the cable car system on Malaysia's Langkawi island said on Monday (Feb 19) it will carry out an investigation to determine the cause of the system failure that left over 1,000 tourists stranded.

Panorama Langkawi Sdn Bhd, which runs the Langkawi SkyCab cable car system on the holiday island, said on Monday a post-mortem would be carried out following the system's malfunction on Sunday.

The operator's board member Azizan Noordin said while a faulty bearing had been identified as the reason for the breakdown, the probe would involve finding the exact cause to ensure there would be no recurrence.

"We will carry out a post-mortem," he told reporters after receiving the stranded tourists earlier Monday morning.

Panorama Langkawi Sdn Bhd is a subsidiary of the Langkawi Development Authority.

At last count, a total of 1,048 tourists and 78 cable car operator staff were stranded for about seven hours before being rescued in stages from 9pm on Sunday.

The breakdown, which occurred at 5.48 pm, is the worst to affect the cable car system since it started operating in 2002.

Datuk Azizan, who is also Langkawi Development Authority chief executive officer, said Panorama Langkawi's technical team was able to mobilise the system manually at about 9pm to bring down the 88 tourists trapped inside 16 gondolas to the base station. 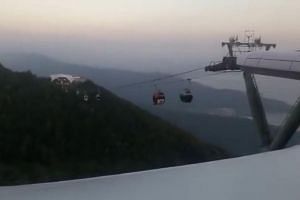 He said the manual method only allowed for minimal movement of the gondolas, but this was sufficient to bring down some of the tourists and also allowed for spare parts to be taken up to the middle station where it was fitted to restore the system.

"The whole system was restored at around 11pm and we were able to evacuate the rest of the stranded tourists and staff," he said.

He said the incident had proved the effectiveness of the Langkawi crisis management team, which among others involved the Fire and Rescue Department and the police.

He said the firemen, together with the Panorama Langkawi technical unit, climbed more than 600m to reach the cable car's middle station, as the first alternative to carry the replacement for the failed bearing.

Azizan said assistance also involved providing accommodation for the night and arranging flights for tourists who missed their departure times due to the incident.

The incident, however, appeared not to have deterred visitors as thousands turned up for the ride on Monday.

When the cable car resumed service at noon, the number of tourists queuing up at the counter to get their tickets for the ride had exceeded 3,000, Azizan said.
There were also no cancellations received from tourists for the cable car ride. “The figure recorded so far today remained within the average daily figures of between 3,000 to 5,000 passengers,” he added.