SINGAPORE - Between a garden salad and a slab of steak, which is the more environmentally-friendly option?

The answer is the former. And an upcoming report is likely to provide the scientific basis supporting recent calls for people to switch to a plant-based diet to combat climate change.

Leaked versions of the Intergovernmental Panel on Climate Change (IPCC) report have pointed to how emissions of methane, a potent planet-warming gas, come from cattle and rice fields, The Guardian reported.

Greenhouse gases like methane and carbon dioxide trap heat in the atmosphere like a blanket. This warming causes weather patterns to change and increases the likelihood of extreme weather events.

The combustion of fossil fuels releases these heat-trapping gases, but the upcoming IPCC report will also point to another major emitter: Land use and abuse.

Apart from a global analysis of the links between climate change and how land is used for things like agriculture, the report will also likely zoom in on specific regions.

Experts who spoke to The Straits Times ahead of the official launch of the report on Thursday (Aug 8) pointed to how the agricultural sector in South-east Asia increasingly contributes to and suffers from the impact of global warming, such as changing rainfall patterns and warming temperatures.

They were commenting on general trends, and not specifics from the report.

Already, Indonesia and Myanmar are listed as two of 10 countries with the largest emissions from agriculture worldwide, he said. 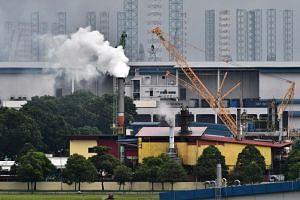 Farmers in the region are also planting more economically lucrative crops now, such as durian, on top of staples like rice. "The competition with traditional crop farming will drive deforestation, thus contributing to higher greenhouse emissions," said Prof Chen.

Greenhouse gases such as carbon dioxide have a global effect regardless of where they are emitted.

But scientists say that the agriculture sector in South-east Asia will be exceptionally vulnerable to the impact of climate change due to its location in the tropics.

Dr Mark Howden, director of the Climate Change Institute at the Australian National University, said: "Many crops are getting awfully close to their high-temperature margin in a given space. And some of these are almost physiological barriers... Some of those temperature limitations are hard-wired and there's not as much opportunity to breed resistance to extreme heat."

Desertification is also likely to pose a problem for the region.

University of Bonn's Dr Alisher Mirzabaev, author of the desertification chapter in the upcoming IPCC report, said desertification is a process of land degradation in dryland areas.

"Besides climate and climate change-related factors, human activities drive desertification," he said, pointing to examples such as unsustainable land management, overgrazing of rangelands by livestock and deforestation due to agricultural expansion.

He added that the issue of desertification is relevant for South-East Asia as dust and sand storms coming from desert and desertified areas may impact the region.

Agriculture contributes to global warming in two main ways: Land conversion and emissions of methane and nitrous oxide from livestock and plantations.

July hottest month measured, 2019 set to be among warmest years

Natural ecosystems such as forests and peatlands function like carbon "banks" - they store carbon in organic matter like soil, roots, vegetation and leaves, preventing the release of carbon dioxide into the atmosphere.

But when they are cleared for plantations or pastures, the land loses its ability to capture and store carbon.

Assistant Professor Janice Lee from NTU's Asian School of the Environment explained: "A change from high-carbon forests and peatlands to low-carbon agricultural systems leads to a loss in carbon stocks and that is certainly a cause for concern."

This is a particularly pressing issue for South-east Asia, home to large swathes of tropical rainforest and peatlands, scientists say.

Mr Searchinger, who is the lead author of a separate report on climate change and food security published by the WRI last month, added: "They are very large sources of greenhouse gas emissions, as is the drainage of peatlands whose burning causes much of the smoke that Singapore occasionally faces."

The WRI report proposed a "menu" of options for policy makers - such as technological opportunities and investing in research opportunities to boost agricultural yield - if 10 billion people are to be fed by 2050, in a world plagued by water woes and warmer temperatures.

The WRI report and the upcoming IPCC one shines the spotlight on the links between climate change and land use. They also raise questions about food security in a warming world.

However, a new Climate and Food Vulnerability Index compiled by British charity Christian Aid has ranked Singapore as the least food insecure out of 113 countries.

Singapore imports more than 90 per cent of its food, and a pillar of its food security strategy has been to diversify its imports. The government is also investing in local agriculture, by offering grants to help farms here increase productivity and weather-proof their operatons by using technology.

How we're pushing the planet to the brink

Nations in Africa have topped the list as being most food insecure on Christian Aid's list, with Burundi, Congo and Madagascar listed as the top three.

The report accompanying Christian Aid's index found that the top 10 most food insecure countries generate an almost negligible amount of emissions on a per-capita basis.

The charity said that Burundi is a country had the lowest carbon dioxide per-capita emissions at a 0.027 tonnes. "This means that the average Russian generates the same carbon dioxide emissions as 454 Burundians, an American 581 and a Saudi 719," said Christian Aid.

According to the report, Singapore generates 9.637 tonnes of carbon dioxide per person, which means that the average Singaporean generates as much as 357 Burundians.