JAKARTA (THE JAKARTA POST/ASIA NEWS NETWORK) - Statements from survivors of an overloaded ferry in Indonesia revealed that most of the victims had been trapped in the vessel's lower deck when it sank in Lake Toba, North Sumatra, last week.

"When the boat was sinking, its lower deck was packed with passengers," Mr Budiawan, head of the Medan search and rescue (SAR) team in North Sumatra, told The Jakarta Post.

As of Sunday, the team has found 22 passengers, 19 of whom survived. The exact number of people travelling that day remains unknown as the ferry had been overloaded, though authorities' have estimated 184 passengers were on board.

The ferry's maximum capacity is 60 passengers.

SAR personnel faced a number of challenges in their search for missing victims, including the lake's cold temperatures in the evenings, which meant they could dive only during the day. Divers have also been unable to locate the vessel, KM Sinar Bangun, as they had been warned against going past a depth of 80m.

On Sunday, after seven days of searching, multibeam and side-scan sonars detected two objects at 490m beneath the surface that resembled the sunken ferry, according to National Search and Rescue Agency (Basarnas) head, Air Marshal M. Syauqi.

SAR teams employed two methods in their attempt to locate the vessel: combing the waters within a 32km radius of Tigaras Port and diving with sonar devices.

"We are still processing our findings," Mr Syauqi said, adding that chances were high the objects detected by sonar were the remains of the ferry.

According to Mr Arie Prasetyo, head of the Lake Toba Authority board, the search for KM Sinar Bangun was being conducted by Basarnas survey, private company Mahakarya Geo Survey and the Bandung Institute of Technology Alumni Association.

"As for the next step, we will hand over the process of identifying KM Sinar Bangun to the authorities," Mr Arie told the Post. 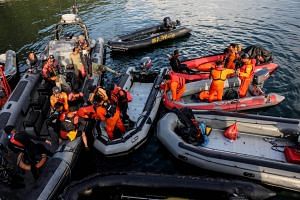 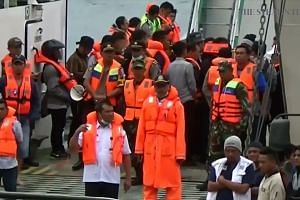 Another boat accident occurs in Indonesia's Lake Toba, one missing

KM Sinar Baru capsized on June 18 at about 5pm local time as it was travelling from Simanindo Port to Tigaras Port in Simalungun.

The ferry's captain, only identified as TS, was detained by Samosir police on Sunday and declared a suspect in the incident.

According to National Police chief Tito Karnavian, this was not TS's first time steering an overloaded ferry. He said investigators would also question related parties that were supposed to be responsible for the boat, such as the transportation agency and the local harbour master.

"I will not hesitate to take action against whoever is responsible; not only the captain but also those responsible for monitoring the vessel's operation," General Tito said on Sunday as quoted by tribunnews.com.

The sinking of KM Sinar Bangun is the latest in a long list of similar accidents that highlight the negligence of small boat operators when it comes to passenger safety.

According to Mr Saut Gurning, dean of the November 10 Institute of Technology's marine engineering postgraduate programme, safety awareness among small boat operators remained low, and passenger safety was not a priority to them.

However, vessel operators are not the only ones to blame as regulators, and even passengers themselves, have little awareness regarding the safety requirements of boats, he said.

"These small vessel operators often use their own experiences to take care of passenger safety instead of actual passenger safety standards. For example, they provide safety equipment, but they only provide it in certain quantities, which, in many, does not match the number of passengers on board," he said.

Furthermore, operators often attempt to fit more passengers on their boats than their maximum capacity, he added, pointing to the local tuktuk (motorboat) on Samosir as an example.

"Most tuktuk can only carry up to 50 people at the same time, but the captain allows 70 people to board. This is a common practice in the area," Mr Saut said.