JAKARTA (THE JAKARTA POST/ASIA NEWS NETWORK, REUTERS) - The government may need to work harder to attract tourists to the scenic Lake Toba in North Sumatra following a tragic boat accident during the Idul Fitri holiday that has raised concerns over whether tourism will be negatively impacted in the emerging destination.

Carrying more than 100 people, KM Sinar Bangun capsized on Monday (June 18) after departing to Simalungun regency, North Sumatra, from Samosir, an island at the centre of the world's biggest volcanic lake.

The boat was reportedly hit by bad weather, causing panic among passengers who jumped into the lake.

Indonesia's search and rescue agency has revised up the number of passengers missing to 180 from around 130 estimated earlier, an official from the agency told Reuters on Wednesday.

The new figure for the number missing is three times the ferry's capacity. Budiawan, head of the National Search and Rescue Agency in Medan, said 18 survivors were found and two bodies had been recovered on Monday evening.

The head of the Samosir Disaster Mitigation Agency, Mr Mahler Tamba, said the evacuation process for the victims had been hampered by bad weather that showed no signs of letting up as of Tuesday morning. As a result, the search and rescue team that was deployed to the lake faced difficulties in rescuing victims.

He said the team had extended the search area to 5km away from the location of the vessel.

"There have been strong winds, big waves since this morning, so it was difficult for the search and rescue team to find the missing victims," Mr Mahler told The Jakarta Post on Tuesday.

Most of the boat passengers were local tourists from North Sumatra who planned to spend Idul Fitri at Lake Toba. The tragic accident did not stop the tourists from travelling around the lake.

"We want to visit the white sandy beaches of Parbaba on Samosir (island). It's been a while since we last visited," said Mr Zulfachri, a 45-year-old tourist from Medan, the capital city of North Sumatra, while preparing to cross the lake along with his family.

Lake Toba is one of the government's top 10 priority destinations currently under development as part of a grand ambition to bring in 20 million foreign tourists next year.

President Joko Widodo himself officiated the opening of the nearby Silangit International Airport last year to ease tourist access to the destination.

At present, the government is carrying out a few projects to spur the growth of tourism in and around Lake Toba, including the development of the Kualanamu-Tebingtinggi-Pematang Siantar toll road.

Other projects include the construction of a 100km outer ring road and the extension of Silangit airport's runway from 2,200m to 3,000m to welcome larger aircraft. The airport recently opened a direct flight to Singapore.

The tourism authority of Lake Toba is currently seeking more than 1,800 hectares of land to welcome investment, which could total a potential US$1.6 billion (S$2.2 billion), according to data from the Tourism Ministry.

However, in April alone, North Sumatra saw a 12.39 per cent decline in foreign tourists to 18,740 visitors year-on-year. 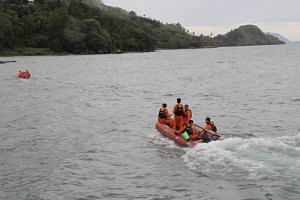 Mr Asnawi Bahar, chairman of the Association of Indonesian Tour and Travel Agencies, said he was concerned about the impact the accident might have on Lake Toba's image.

"We are, of course, concerned because we are trying to push Lake Toba as a destination of choice during the IMF-WB (annual meetings)," he said, referring to a large-scale financial event to be held jointly by the International Monetary Fund and World Bank in October in Bali.

Mr Asnawi said the government should have been careful from the start regarding transportation maintenance in tourist areas and stressed that his association would attempt to provide clarity on the situation to clear doubts among potential visitors.

"We have to be concerned about safety as well," he said.

The incident has raised alarms over safety in maritime transportation following a string of accidents elsewhere within the last two months.

A sailing boat carrying 73 passengers sank in Makassar, South Sulawesi, on June 13. Around 16 passengers were reported dead, while 55 others survived and two were reported missing. The South Sulawesi Police later said that none of the deceased victims wore life jackets and that the ship was found to be overloaded during the accident.

Meanwhile, in Palembang, North Sumatra, four people died in a speedboat accident on May 29.

Toba Lake Authoritative Body president director Arie Prasetyo acknowledged that the accident at the lake should serve as a lesson for all regarding safety but said he believed that tourism would not take a hit.

With a rising number of tourists to Lake Toba prior to the accident, Transportation Minister Budi Karya Sumadi said there had been a growing demand for boats and called on port authorities to take measures to protect passengers.

"The overloading (of boats) is prohibited; during the Idul Fitri holiday, there are oftentimes problems with overcapacity and (boat operators) force (more people to board)," he said.

"The second (requirement) is the (mandatory) use of life jackets."