KUALA LUMPUR - Malaysia is exploring new options to push down the cost of the China-backed East Coast Rail Line (ECRL), after an impasse over pricing nearly torpedoed the 688-km line spanning the width of the peninsula last month.

The Straits Times understands that a new alignment was among solutions mooted soon after the Pakatan Harapan (PH) administration walked back on plans to cancel the contract with China Communications Construction Company (CCCC) signed under the ousted Barisan Nasional regime.

"It all needs to be recalculated. They are relooking the whole thing all over again," a source familiar with the negotiations said.

But former finance minister Daim Zainuddin, a close confidante of Tun Mahathir who is leading negotiations on the ECRL, told Nanyang Siang Pau in an interview published on Thursday (Feb 21) that Chinese negotiators are only due to visit this month and a final decision is "not easy due to this issue being quite complicated".

Official sources told The Straits Times that the government wants to bring the price tag close to early estimates under the Najib Razak government. These ranged from RM27 billion to RM35 billion, compared to the RM66 billion that was finally agreed.

The PH administration claims that after including financing and land costs, the bill would balloon to RM81 billion, a figure it cannot afford having inherited over RM1 trillion in liabilities from its predecessor. 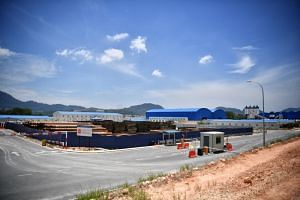 With Malaysia's ECRL hanging in the balance, concerns grow over retaliation by Beijing

But the Chinese company, in negotiations with the Malaysian government last year, did not reduce its offer to below RM40 billion, said several sources.

The ECRL is a key project in China's Belt and Road Initiative. It was supposed to link Port Klang in the west to Kuantan Port in the east, before continuing north to the Thai border. This would create a land bridge bypassing Singapore in one of the world's most important trade routes that connects Asian markets facing the Pacific and those that use the Indian Ocean, including Europe and Africa.

Although certain cost-saving measures are amenable to both sides - including reducing the scale of the project size and removing some stops - a sticking point is Selangor's insistence that the rail not cut through the Klang Gates Quartz Ridge. Under the current plan, the portion connecting Port Klang and Gombak will pass through the 16-km quartz ridge, which is the world's longest and the state wants it gazetted as a Unesco heritage site.

Realigning the rail around this feature could add billions to the cost depending on the path selected, but it is unclear if Selangor will be persuaded to change its mind.

"Our stance on Klang Gates has not changed, and as of January no one has approached us to reconsider," a top official from the western state said on condition of anonymity.

Another change bandied about is to end the line at Kuantan in Pahang state so that the ECRL meets the main objective of linking the two ports in east and west coasts of the peninsula, instead of the earlier version that extends the rail to Kelantan in the north.

Malaysia had initially decided to abandon negotiations with Beijing-controlled CCCC in early January, according to documents seen by The Straits Times, after failing to bridge the gap in valuation since putting the ECRL under review last June.

But China prevailed on Kuala Lumpur to withhold from announcing the decision, official sources said, ostensibly so that new options could be put on the table.

However, Economic Affairs Minister Azmin Ali appeared to let the cat out of the bag, when he said Malaysia could not afford RM500 million a year in interest after being quizzed over whether the project had been scrapped. But Finance Minister Lim then expressed "shock" at this apparent revelation.

After days of confusion, Dr Mahathir finally explained on Jan 29 that "some decisions were made but we have to find a better solution. We are still negotiating".

One top official said: "Whatever is the outcome, we can't afford to anger China during this uncertain economic period, as they are an important trade partner."

Another noted that despite publicly decoupling the two issues, the ECRL's progress could have an impact on whether the government can seal the sale of 500,000 tonnes of palm oil to the Asian superpower as proposed during Dr Mahathir's August visit.