Writing on his blog, Datuk Seri Najib said connectivity and public transportation were issues that "are very dear and close to my heart".

"Once completed, Malaysians will be able to have 'nasi lemak' in Kuala Lumpur, close deals over 'chili crab' in Singapore and be back for a dinner of 'rendang' with the family," Mr Najib said in the blog post on Monday.

Malaysia and Singapore are set to sign a Memorandum of Understanding (MOU) on the project in Putrajaya on Tuesday. The signing ceremony will be witnessed by Mr Najib and Prime Minister Lee Hsien Loong, the Prime Minister's Office said in a statement on Monday. 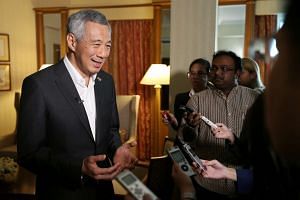 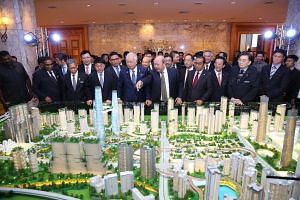 The proposed 350km double- track HSR line will cut travelling time between Singapore and Kuala Lumpur to 90 minutes, compared with more than four hours by car. Its two terminuses will be in the new township of Bandar Malaysia at the edge of Kuala Lumpur, and in Jurong East.

The train will have several stops, including in Seremban, Ayer Keroh, Muar, Batu Pahat and Iskandar Puteri, before heading towards Jurong East via Tuas. Iskandar Puteri is the new name for Nusajaya.

According to Malaysia's Transport Minister Datuk Seri Liow Tiong Lai, the tender for the project is expected to be called within a year.

The MOU will pave the way for detailed negotiations on the main bilateral agreement, which is expected to be signed by the end of this year, the New Straits Times newspaper reported last Thursday.

Malaysian media reports have said that the project is estimated to cost between RM60 billion (S$20.4 billion) and RM65 billion.

Commenting on bilateral relations, Mr Najib said ties between the two sides had grown stronger after he took over as Prime Minister, adding that he has been "advocating for a spirit of mutual benefit between our two countries."

"Together, we are on a forward trajectory in both trade cooperation and people-to-people ties. This mutually beneficial relationship between Malaysia and Singapore is underlined in both our countries' development plans," he added.

"We trust that with good governance, we will be able to develop a strong, inclusive and sustainable economy based on sound fundamentals. Our shared belief in stability, harmony and diversity complement our mutual aspirations for both our countries and the region," Mr Najib said.

The MoU is a step forward and signifies our firmest commitment to the iconic KL-Singapore High Speed Rail project https://t.co/72Ha3v4ful

Mr Najib also said the growing significance of the Asean region was a testament to the success of Malaysia and Singapore's joint effort with the other Asean partners.

"Our shared belief in stability, harmony and diversity complement our mutual aspirations for both our countries and the region," he said.