The government also had to transfer shares of utilities Telekom and Tenaga Nasional to the central bank, Bank Negara Malaysia (BNM), to cover up for the losses which occurred during the prime ministership of Dr Mahathir Mohamad, Datuk Seri Johari said.

The behind-the-scenes moves involving the central bank were revealed by Mr Johari in an open letter to Dr Mahathir.

The revelations involving the four national companies were the first time the government had openly said what it did to inject funds into BNM after the 1990s huge forex losses.

Mr Johari's letter was written in response to a blog post by Dr Mahathir on Sunday, asking why BNM's forex reserve drop of US$39.6 billion (S$53.1 billion) between 2013 and 2015 during the Najib administration was not probed, but the 1990s forex losses was put under the microscope. 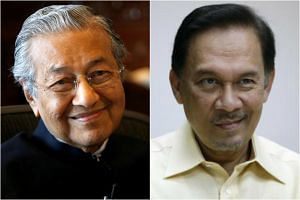 The commission recommended that Dr Mahathir and jailed opposition leader Anwar Ibrahim, who was then finance minister, be investigated for criminal breach of trust offences.

At the heart of the issue is whether voters would believe that PM Najib was being fair when it investigated the 1990s BNM financial losses but did not probe what happened during his watch.

The opposition has claimed that the RCI probe was done to paint Dr Mahathir and Anwar - both opposition leaders today - in a bad light, 25 years after the BNM losses occurred.

The letter by Deputy Finance Minister Johari was part of an ongoing tit-for-tat between Dr Mahathir and himself over the RCI and the 2013-2015 sharp drawdown in BNM foreign reserves.

Dr Mahathir had claimed in his closely followed blog: "The outflow of USD39.6 billion can only be caused by Bank Negara selling US dollars from the national reserves, causing the reserve to lose money during the period between 2013 and 2015".

Mr Johari on Tuesday repeated what he had said previously, that the drop in forex reserves two years ago was caused by "orderly management of foreign exchange market" and not the alleged "speculative foreign exchange activities" embarked during the Mahathir era. 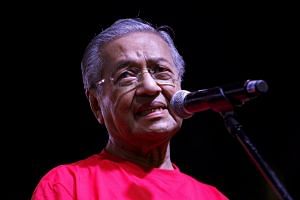 The deputy finance minister said that due to the 1990s losses BNM had to sell off MAS shares at RM8 each to a third party, and Malaysian International Shipping Corporation (MISC) shares at RM10 per share to Retirement Fund (KWAP).

The government also transferred its shares in national telco Telekom and power utility Tenaga Nasional to BNM at the nominal value of RM1 per share.

"These shares were then revalued by BNM at RM22.10 and RM19.30 per share for Telekom and TNB respectively," he added.