PETALING JAYA (THE STAR/ASIA NEWS NETWORK) - The Bar Council has expressed alarm over the impasse in the appointment of a new Attorney-General and pointed out that the Malaysian king is constitutionally bound to accept the Prime Minister's choice of candidate for the post.

In a statement on Monday (June 4), its president George Varughese said over three weeks have lapsed since Prime Minister Mahathir Mohamad announced that the current A-G Mohamed Apandi Ali, was put on garden leave.

It is believed that constitutional lawyer Tommy Thomas has been named by the Pakatan Harapan (PH) government to replace the incumbent Apandi, who cleared former prime minister Najib Razak of graft allegations just months after being appointed by the former premier in 2015.

But the selection of a non-Malay as A-G has not gone down well with the King, Malaysia's constitutional monarch, and sources said the King has the backing of most of the nine state rulers who rotate as the Malay-majority country's supreme ruler.

The royals derive much of their influence from their role as guardians of Malay and Islamic interests.

The Malay Rulers will deliberate on the appointment of the new Attorney-General on Tuesday.

Mr Varughese said: "The A-G has a vital role to play as the principal legal adviser to the government and the Public Prosecutor, and it is therefore imperative that a new A-G be appointed without further delay."

He highlighted Article 145(1) of the Federal Constitution, which states: The Yang di-Pertuan Agong shall, on the advice of the Prime Minister, appoint a person who is qualified to be a judge of the Federal Court to be the AG for the Federation.

Dr M on Tommy Thomas impasse: We are holding on to our principles

"The Yang di-Pertuan Agong must therefore appoint the person, as per the advice of the Prime Minister, as the new A-G and end the impasse without delay," he said. 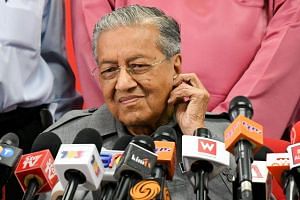 Mr Varughese said the exercise of the constitutional duties by the King in the appointment of the new Attorney-General should not be stifled by extraneous views that take into consideration any criteria that are without constitutional basis, based on irrelevant considerations, or which could be deemed to be arbitrary or discriminatory.

He said: "The Yang di-Pertuan Agong must perform the role of a constitutional monarch strictly in accordance with the provisions of the Federal Constitution.

"The council reiterates that the new A-G, as the principal legal adviser to the government, should be an experienced career lawyer with all-round legal skills and expertise in public law, and be widely regarded and accepted as independent and able to implement law reforms of the government effectively and impartially.

"It must also be a prerequisite that the new A-G possess an unimpeachable reputation and character, integrity, honesty, and sound legal knowledge and learning.

"Such an appointment would augur well for the many institutional reforms that the government is introducing to birth a new beginning for our nation."

Should the appointment of the next Attorney-General be based on merit or ethnicity? It appears that Malaysians are divided on this issue.

The two different schools of thought are apparent as two petitions have gained traction, one supporting Mr Tommy Thomas as Attorney-General and another rejecting his candidacy.

The first petition titled "Reject The Appointment of Tommy Thomas As Attorney General" was launched on iPetitions and has received over 11,000 signatures as of 7.40pm on Sunday.

Started by an individual by the moniker "Pejuang Melayu" (Malay Warrior), the petition does not explicitly state its reasons in objecting to the appointment of Mr Thomas.

Hours later, a contrasting petition supporting Mr Thomas's appointment was launched and has received over 500 signatures in five hours.

Supporters of this petition said the appointment should be based on merit, and not race or religion.