PETALING JAYA (THE STAR/ASIA NEWS NETWORK) - The mothers of two Malaysian crew members of downed Malaysia Airlines flight MH17 are glad that those responsible for their sons' deaths almost five years ago will finally be brought to justice.

"I am happy, as we will finally know who shot down the plane and how it happened. My son was killed and I hope they will be punished for what they did," Madam Noriah Daud said on Wednesday (June 19).

The Dutch-led international investigative team announced on Wednesday that three Russians and a Ukrainian will face murder charges for the deaths of 298 people aboard MH17 that was shot down over eastern Ukraine in 2014.

"I visited the Netherlands with several family members a week before the start of the fasting month in May.

"We stayed over at a friend's home and visited the MH17 memorial, where there were trees planted for loved ones killed in the incident," she said, adding that the visit brought back painful memories for her. 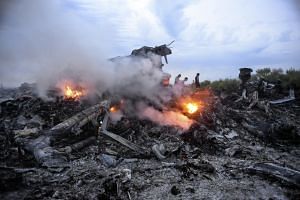 Who are the four men charged with downing of MH17?

US, Britain up pressure on Russia over four suspects involved in MH17 downing

Three Russians, one Ukrainian to face charges over 2014 downing of flight MH17

"His son is now six years old and he wants to know how his father died," the 66-year-old said.

"I will not be following them, as I have no heart to do so."

Madam Noriah, who lives in Cyberjaya, said the family received an invitation to attend the closed-door briefing in Nieuwegein, the Netherlands, but was unable to do so, as it was given in short notice.

Madam Amnah Mohd Sharif, 70, from Klang, whose son, flight attendant Shaikh Mohd Noor Mahmood, was among the MH17 victims, said she got a call from Malaysia Airlines inviting her to attend the briefing.

"I am happy with the news... Those who are guilty should be punished. I leave it to the authorities to do what needs to be done," she said.

She said she was unable to attend the briefing in the Netherlands and passed the information on to her son's widow Mardiani Mahdi, who is a senior flight attendant with Malaysia Airlines.

Mr Ahmad Hakimi, 29, and Mr Shaikh Mohd, 44, were part of the 15-member crew who perished with 283 passengers on July 17, 2014, when MH17 was shot down over Ukraine after departing Amsterdam for Kuala Lumpur.

In the northern Malaysian state of Kedah, the mother of chief flight attendant Azrina Yakob, who perished in the crash, said she wanted justice.

Madam Habibah Ismail, 70, said her family had been waiting for this moment for five years.

"We want to know why the plane was shot and who did it. We will not rest easy until we know," she said.