ALOR SETAR (THE STAR/ASIA NEWS NETWORK) - Thousands gathered at the Istana Anak Bukit in the northern Malaysian state of Kedah on Tuesday (Sept 12) to pay their last respects to the late Sultan Tuanku Abdul Halim Mu'adzam Shah who died a day earlier.

Tuanku Abdul Halim died in Alor Setar on Monday at the age of 89.

Members of the public and dignitaries, including the Yang di-Pertuan Agong Sultan Muhammad V visited the palace, where the lying in state was held, to pay their respects on Tuesday.

Tuanku Abdul Halim will be laid to rest at the Langgar Royal Mausoleum, the Kedah royal burial grounds, at 4pm.

Prime Minister Najib Razak, who is away in the United States on a working visit, had conveyed his condolences over Tuanku Abdul Halim's demise on Monday.

The funeral procession is scheduled to begin at 2.30pm.

Tuanku Abdul Halim ended his term as the 14th King, or the Yang di-Pertuan Agong, last December and was replaced by Sultan Muhammad V, the Kelantan ruler.

He made history when he became Malaysia's King for the second time in 2012, after having served as King for the first time in 1970 under the country's rotational system for appointing its ruler. 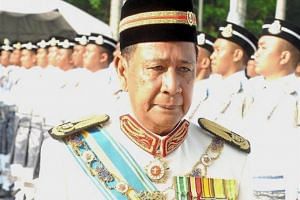 The northern state's Menteri Besar Ahmad Bashah Md Hanipah has announced that the state will observe a seven-day mourning period starting on Monday while flags will be flown at half mast for three days to mark his passing.