ALOR SETAR - Malaysia's State Health director Norhizan Ismail has named Kedah as one of the states with the most vaccine rejection cases, amid concerns that parents are putting their children at risk by refusing vaccinations for the young ones.

"Among the reasons for vaccine rejection in Kedah is the doubt cast on the status of the vaccine, whether halal or non-halal, and doubts about the content of the vaccine being not safe," said Dr Norhizan.

"Another reason is family influence, homeopathic medicine and worrying about the side effects of the vaccine," he said on Thursday (Feb 28).

Separately, the Health Ministry’s vaccination task force will investigate why measles, mumps and rubella (MMR) vaccinations have dropped to 89 per cent, lower than the 95 per cent required for herd immunity, Malay Mail online news reported him as saying on Friday.

“We have no problems with the compulsory vaccination from birth to three months. The only problem we have is the MMR vaccination where 89 per cent of babies were vaccinated in 2018,” Deputy Health Minister Lee Boon Chye said.

Dr Lee said the problem could be due to parents growing complacent. “They maybe thought their child is healthy and face no risk,” he added.

News emerged last month that five children in Johor had tested positive for diphtheria after coming into contact with a two-year-old toddler who was believed to have died from the disease in the same month.

Diphtheria is a highly contagious disease with symptoms including fever, swollen tonsils and a grey or white patch in the throat. The disease can lead to organ failure as well as blood and heart infections, resulting in death. 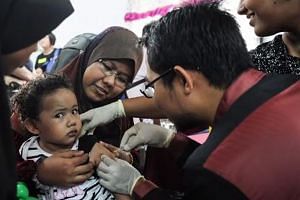 According to the World Health Organisation, no vaccine is 100 per cent effective and not all those vaccinated develop immunity. But vaccinations significantly lower the risk of getting infected.

The rise in children contracting contagious diseases has been noted in Malaysia in the last few years, with health authorities worrying that there are parents who reject immunisation programmes for fear that the vaccines used infringe strict religious rules.

Though Islamic authorities have waived stringent halal requirements if suitable vaccines are not available, conservative Muslims sometimes reject the innoculations over concerns that some may have the DNA of pigs, which Muslims are forbidden to consume.

Dr Norhizan said 17 cases of diphtheria were recorded in Kedah from 2015 to 2017, with four deaths reported. The four victims - all children - were not vaccinated.

No diphtheria case has been reported in Kedah this year.