Subianto and his running mate Sandiaga Uno will lower company and individual taxes by between 5 and 8 percentage points over five years and widen the tax-to-gross domestic product ratio to at least 16 per cent from about 11 per cent, according to Anthony Budiawan, a member of the pair's election campaign team.

Lower taxes will lead to greater compliance and allow the government to cut its borrowings to fund its budget, he said.

The swelling of government debt and its high foreign ownership were factors in a market sell-off last year, which saw the rupiah tumble to levels not seen since the 1997-98 Asian financial crisis.

"Our corporate tax is one of the most expensive in the region," Rizal Ramli, a former finance minister, told reporters in Jakarta on Friday.

Prabowo is taking on President Joko, popularly known as Jokowi, in a rematch of the 2014 election, which he narrowly lost to the former furniture businessman and the first non-elite to occupy the presidential office. 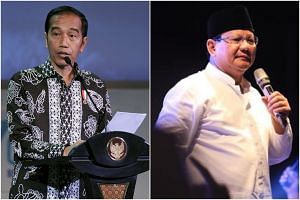 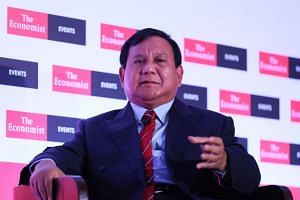 The former general has picked Uno, a business-savvy former private equity investor, and has blamed the high public debt and slump in the currency as examples of Jokowi's mismanagement of the economy.

If elected, Prabowo will also introduce a progressive individual tax rate, with the rich paying more to ensure a more equitable society, Budiawan said. A cut of between 5 and 8 percentage points in corporate tax can boost economic growth by as much as 0.7 percentage point a year in the short term and deliver a 1 percentage point increase in the tax-to GDP-ratio, said Harryadin Mahardika, another member of Prabowo's economic team.

While Jokowi's government has failed to increase the tax ratio despite introducing an amnesty plan while it continued to rely on revenue from commodities and debt to finance the budget, a Prabowo administration will overhaul the tax bureaucracy to make it more efficient, Mahardika said.

"Everyone understands the capability of Prabowo and Sandi. They are entrepreneurs and know what they are doing," Mahardika said. "The current administration gives false hope. We won't do that. We can make Indonesia great again as Prabowo said."

Jokowi, who came into office promising to deliver annual growth of 7 per cent, is set to miss the target by a wide margin as the economy has expanded at about 5 per cent during his tenure.

But the incumbent enjoys a lead of 20 percentage points in opinion polls over Prabowo after he created millions of new jobs and spent billions of dollars to add roads, ports and airports to cut logistic costs in the archipelago.

The incumbent, who's paired with Ma'ruf Amin, a conservative Muslim cleric, will focus on fiscal and structural reform and development of manufacturing and export-oriented industries to create more jobs, according to Jokowi's election manifesto.

The Prabowo-Uno combination will also involve more private sector participation and end the dominance of state-owned enterprises in projects and opt for more multilateral free-trade agreements than bilateral pacts.

Highlights of Prabowo's economic plan include pledges to:

- Tourism, energy and creative industries to be opened up for private investment