JAKARTA - The two candidates in the forthcoming presidential election, incumbent, Joko Widodo, who is seeking a second term in office, and his challenger, Prabowo Subianto, went head to head on key economic issues in a second televised live debate on Sunday (Feb 17).

During the 90-minute encounter, both men outlined competing views on energy, food, infrastructure, natural resources and the environment in an effort to sway those undecided who are reported to number more than 10 per cent of the 190 million registered voters in the world's third largest democracy.

Mr Joko, 57, a reform-minded leader who has chosen a prominent conservative cleric, Ma'ruf Amin, as his running mate, not surprisingly listed his achievements since coming to power in late 2014. He pointed to the construction of 191,000 kilometres of roads and 58,000 irrigation channels in villages across the sprawling archipelago of more than 17,000 islands.

Furthermore, the president also touted several other infrastructure projects, including roads, seaports, airports, that his administration had undertaken in the past four years.

"We want to continue to do this so that the connectivity between islands, provinces and cities are good and, therefore, bring ease and speed to logistics and the transportation of goods. Forget the competitiveness without it," Mr Joko said during the debate, which was held at a hotel in central Jakarta.

In response, Mr Prabowo, 67, a retired army general who is pairing up with former businessman and Jakarta deputy governor Sandiaga Uno, sharply criticised the government for inefficiency in the projects.

"Many of them have been carried out quickly without thorough feasibility studies, causing inefficiency and losses," he said. 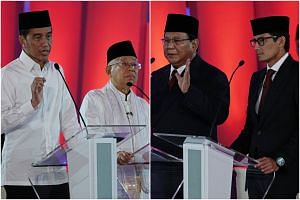 "Infrastructure is for the people, rather than people for the infrastructure. Infrastructure is not a monument and it must be beneficial," Mr Prabowo added, citing the light rapid transit network in Palembang, South Sumatra, and Kertajati International Airport in Majalengka Regency in West Java as poorly targeted infrastructure.

First Indonesian presidential debate between Jokowi and Prabowo kicks off

Food security was touched upon when the debate moved to a question and answer format from an invited panel which consisted of experts and activists. They connected the issue to Industry 4.0, which refers to digital technologies such as the Internet of Things and artificial intelligence that will reshape the future.

Mr Prabowo, responding to a question, said that the more important issue for now was to support local farmers and provide food for all people at affordable prices.

He added that while it was good to talk of Industry 4.0 he would "guarantee that Indonesia can provide its own food, without importing it from other countries."

Mr Joko, whose administration has nearly completed a nationwide broadband project, did not waste the opportunity to take a jibe at his opponent, saying that he seemed "less optimistic about the future."

"With the development of our human resources, we will embrace Industry 4.0," Mr Joko said.

He added that some financial technology start-ups had helped connect farmers and their buyers as well as offering necessary credits for working capital.

During a question and answer session between the two candidates, Mr Prabowo, as he was widely anticipated to do, asked the president why his administration had to import foodstuffs, such as sugar, during the harvest season.

"This really hits our farmers. When our farmers harvest sugar cane, millions of tons of sugar are imported," Mr Prabowo said.

Mr Joko responded by pointing out that Indonesia managed to not only reduce imports of corn last year but also had a rice surplus.

"With the surplus, then why do we import? That's to keep stocks, to stabilise prices. We need to have stockpiles, in case there is a disaster or harvest failure," Mr Joko said.

The debate yesterday was the second of five scheduled before the election on April 17. The next one will be held on March 17. .

Opinion polls for now show the Jokowi-Maruf camp ahead in the majority of the country's 34 provinces.