KUALA LUMPUR - The illegal dumping of toxic waste into Sungai Kim Kim in Pasir Gudang, Johor, has sickened 937 people and forced the closure of all 111 schools in the area.

Of the sick people, 12 are in stable condition in intensive care, the Malay Mail said on Thursday, citing the Health Ministry. No deaths have been reported.

A RM6.4 million (S$2.12 million) fund has been approved to clean up a 1.5km stretch of the river, Energy, Technology, Science, Climate Change and Environment Minister Yeo Bee Yin announced on Wednesday (March 13).

Here's what you need to know about the environmental catastrophe:

1. WHAT ARE THE TOXIC CHEMICALS?

Ms Yeo has said that at least eight chemicals have been identified, based on sampling, but there are still unknown chemicals in the mix.

One of the chief pollutants has been identified as marine oil waste by Department of Environment investigators. It is used to lubricate marine engines and emits flammable methane and benzene fumes. 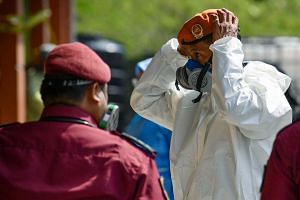 Other news reports in the New Straits Times and Berita Harian have also listed other compounds such as acrylonitrile and acrolein, in addition to hydrogen chloride, toulene, xylene and limonene.

2. WHEN WAS THE WASTE DUMPED?

A tanker lorry dumped the chemicals in the river on March 6, according to the Johor Department of Environment.

The first 103 people fell sick on March 7 and since then, the number of people who have fallen sick has risen to 937.

3. WHERE WAS THE WASTE DUMPED?

The toxic chemicals were dumped under a bridge connecting Taman Pasir Putih and Taman Kota Masai.

The location is just around half a kilometre from the schools where students were first affected: SK Taman Pasir Putih, and SMK Pasir Putih.

4. WHY ARE THESE CHEMICALS TOXIC?

Methane exposure reduces oxygen levels in the body and can cause organ damage, including to the brain and heart, according to the Canadian Centre for Occupational Health and Safety. Methane gas can also irritate the eyes.

Meanwhile, benzene can cause cell dysfunction, according to the US Centres for Disease Control and Prevention (CDC). It alters blood levels of anti-bodies, leading to the loss of white blood cells and causing damage to the immune system. In addition, this can prevent bone marrow from producing enough red blood cells, leading to anaemia.

Acrylonitrile is highly flammable and toxic at low doses. It releases fumes of hydrogen cyanide and oxides of nitrogen. It is classified as a Class 2B carcinogen - or "possibly carcinogenic" - by the International Agency for Research on Cancer (IARC).

Hydrogen cyanide impedes the normal use of oxygen by the body's organs and can be deadly. All organ systems sensitive to low oxygen levels - the brain, heart, blood vessels and lungs - are vulnerable.

Acrylonitrile and acrolein exposure can cause strong irritation to the skin, eyes, and nasal passages, according to the CDC and Ullmann's Encyclopedia of Industrial Chemistry. The Johor Department of Environment detained two factory owners and a worker, all in their 50s, on March 11 over their suspected involvement in the dumping of the chemicals.

All three have admitted to their involvement, but have yet to be named pending charges being filed in court. 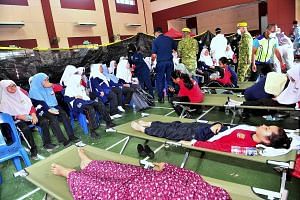 On Wednesday, an illegal factory owner was due to be charged at a Magistrate's Court in Johor. However, the prosecution has postponed the case pending further investigation.

Johor Mentri Besar Datuk Osman Sapian said on Wednesday that a task force has been set up to to investigate the pollution.

6. HOW DOES ONE AVOID EXPOSURE?

The public have been offered the following advice:

- Do not enter the affected area and do not take part in recreational activities near Sungai Kim Kim, as the toxic chemicals can spread due to temperature, wind and weather conditions.

- The Fire and Rescue Department of Malaysia has advised the use of appropriate protective equipment and measures. For example, if a family member is affected, wash his or her clothing separately from the rest of the family to avoid the chemicals being transferred.

- Get immediate treatment if experiencing symptoms such as nausea, shortness of breath, or eye and chest irritation.

- Follow the instructions of the authorities and stay up-to-date on the latest developments. Don't fall prey to sensational or false information.