JOHOR BARU (THE STAR/ASIA NEWS NETWORK) - The Johor sultan's new Boeing 737 aircraft has touched down at the Senai International Airport after flying in from the United States.

Sultan Ibrahim Ibni Almarhum Sultan Iskandar was at the airport to view and tour the aircraft after it landed at about 1.30pm on Monday (Feb 29).

The plane, painted in gold and blue, bears the Royal Johor Crest on its tail and the state's royal and state flags on its body.

According to aircraft monitoring website flight radar 24, the plane earlier travelled from Los Angeles to Hawaii before leaving Honolulu on Feb 27.

The plane will be parked at the Royal Flight hangar at the airport, where the ruler already has several aircraft and helicopters.

Sultan Ibrahim said his latest aircraft, which could accommodate between 25 and 30 people, would be used to promote Johor.

"I want to travel the world like my ancestors who once travelled around in ships," he told The Star.

Sultan Ibrahim said he could also bring along government officials on his trips.

To a question whether he could fly the aircraft, the qualified pilot replied: "I will go for my simulator training in Brisbane before I fly this plane."

Asked about plans for his maiden trip on the new plane, Sultan Ibrahim said: "I have yet to plan my trip but I might just take a flight to Penang for nasi kandar."

He also hoped to bring the less fortunate to Mecca for their Haj pilgrimage in his plane.

The Sultan said the plane took about two years to be completed, including 18 months for the interior to be refurbished.

The plane is equipped with a dining room, bedroom, shower and three galleys.

Sultan Ibrahim is an avid collector of luxurious vehicles including cars, motorcycles and trucks. 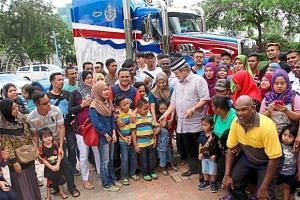 His earlier purchase was the world's most expensive Mack truck.

The huge vehicle reportedly took a year to be built at the manufacturer's Wacol headquarters south-west of Brisbane, Australia.

The truck has many fancy gadgets, including a six-camera CCTV system, two flat screen TVs, a stone-topped kitchen area, barbecue, double bed and seats with 72,000 stitches of gold thread.