PETALING JAYA/JOHOR BARU - The dumping of chemicals into a river in southern Johor about a week ago has caused 500 people to be treated for breathing difficulties and respiratory ailments including dozens of students.

The Education Ministry late on Wednesday (March 13) ordered all 111 schools in the Pasir Gudang to close with immediate effect as the area has been affected by the toxic fumes that wafted into the schools located near Sungai Kim Kim, The Star Online reported.

Earlier, the government had said 13 schools were shut, before increasing the number to 34.

"Based on the current situation and information from the State Disaster Management Committee, the Education Ministry has decided to close all 111 schools in the Pasir Gudang district effective today (March 13) until a date to be notified," said Education Minister Dr Maszlee Malik.

"Accordingly, all students, teachers, staff and employees at all schools do not have to attend to their respective schools until the situation improves," he said.

The education ministry requested all parties to take precautionary measures and always be aware of the instructions from authorities.

Earlier on Wednesday, Dr Maszlee said he was told that the situation had reached a critical level.

The chemicals, believed to contain heavy metal used to dissolve metal at a scrapyard and a chemical factory in the Kulai area, were discharged into Sungai Kim Kim that flows into the Strait of Johor near Singapore's Pulau Ubin.

Students in at least seven Johor schools have been affected as the chemicals flowed downstream in the last few days, causing some to faint, with health workers rushing to schools to help them. 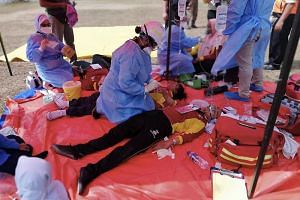 Malaysia's environment minister Yeo Bee Yin said on Wednesday that an illegal factory owner involved in tyre recycling in Kulai, Johor, is expected to be charged on Thursday (March 14) in connection with the dumping. If found guilty, he faces a maximum jail term of five years and a fine of RM500,000 (S$165,700), she said.

She said the Department of Environment would be installing gas detection monitors around Pasir Gudang to check on the air quality.

The ruler of Johor Sultan Ibrahim Ismail Sultan Iskandar, said in a statement on his Facebook page on Tuesday (March 12): "These are innocent schoolchildren, teachers and health workers... Don't those responsible feel any remorse at the thought that children in the Intensive Care Unit (ICU) are fighting for their lives?

"These are my rakyat (people) and I will not let this matter go unanswered. I urge all government agencies to apprehend and punish the culprits immediately."

Health Minister Dr Dzulkefly Ahmad said on Wednesday that nine people were treated in the ICU in two hospitals from last Thursday.

The latest incident occurred on Tuesday when 260 people, including students from two Tanjung Puteri Resort schools, were rushed to hospital with breathing difficulties.

Fishermen in the area are claiming that the thick sludge in the water is causing their boat engines to fail and they have to row their boats out to sea.

Meanwhile, Johor's Health, Environment and Agriculture Committee chairman Dr Sahruddin Jamal said that the matter was getting from bad to worse.

It was learnt that the National Disaster Management Agency has taken over the handling of the situation at Sungai Kim Kim. "In the 10am incident, four schoolchildren were rushed to the school's treatment room after showing symptoms of gas poisoning," he said.

"The number of pupils suffering from dizziness, nausea and vomiting increased gradually. They were rushed to the Taman Pasir Putih Community Hall for treatment," he said.