A statement from the Royal Press Office of the Johor palace said the ceremony at Istana Bukit Serene, the official residence of the royal family, was witnessed by Johor's Sultan Ibrahim Sultan Iskandar and his consort Raja Zarith Sofiah Idris Shah, close family members and friends.

Also present were the groom's parents Martin and Henriette Verbaas, his brother and sister, as well as close family friends who had flown in from the Netherlands.

The groom was then led to a special room on the first floor of the palace, where his bride was waiting, for the ring-placing ceremony. 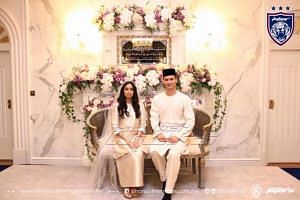 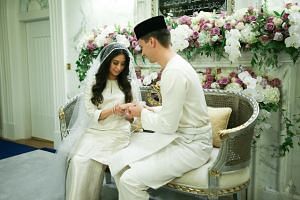 In Pictures: The Johor royal wedding

The couple then paid their respects by kissing the hands of both their respective parents, as well as their aunts and uncles, in the main lobby of the two-storey palace.

The families of the bride and groom had earlier also exchanged wedding gifts comprising trays laden with items which were carried into the hall by soldiers of the Johor Military Force, the security unit of the Sultan.

The gifts from the Johor Royal Family to the groom included a copy of the Quran, the Muslim holy book, a prayer mat and a gold ring.
Mr Dennis Muhammad also received a set of traditional Malay men’s shirt and long pants with sampin, special cloth worn around a man’s waist, betel nut leaves, a cake, the traditional halwa maskat, an Arab-Indian sweet dish, and bunga rampai flower potpourri.

The royal wedding ceremony will continue tonight with the sitting-in-state ceremony at the Grand Palace, a separate palace for ceremonies, which will be attended by 1,200 guests.