He said that the betrothal ceremony would be held at 10am on Aug 14 at Istana Bukit Serene followed by the solemnisation ceremony.

"His Royal Highness has consented for the state Mufti Datuk Muhammad Tahrir Shamsudin to conduct the ceremony as his official representative," he told reporters during a press conference here.

He added that the bersanding ceremony (sitting-in-state ceremony) will be held at 8pm on the same day at the throne room of the Istana Besar.

Tunku Aminah, who was born on April 8, 1986, at Hospital Sultanah Aminah in Johor, is the second of six siblings and the only daughter of Sultan Ibrahim and Raja Zarith.

She received her primary school education in the state before moving to Singapore to further her studies at the Australia International School and the La Salle School of Fashion and Design. She is the President of the Johor Darul Ta’zim (JDT) Football Club, which is owned by her brother, Tunku Ismail Sultan Ibrahim. 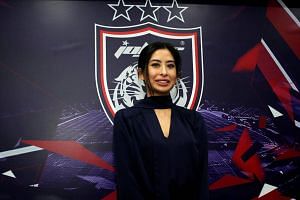 Mr Dennis was a semi-professional footballer and served as manager of the Johor Darul Ta'zim Football Club's Concept Store and Cafe before he became the marketing manager of Singapore's Tampines Rovers Football Club.

He was born as Dennis Verbaas on May 1, 1989, in Lisse, a town near Amsterdam, Holland and is the second of three children. He received his education from Floretti College Hillegom in the Netherlands before studying mechanical engineering at ROC Leiden. He had converted to Islam in May 2015, Mr Abdul Rahim said.