JOHOR BARU - Johor hopes to raise the price of raw water that it sells to Singapore by more than 16 times, from 3 sen to 50 sen per 1,000 gallons, after discussions with its southern neighbour, the state's Menteri Besar said on Thursday (July 5).

The potential price tag is the same as what Johor charges Melaka, Osman Sapian told a news conference. It is also the price at which Singapore sells treated water back to Johor.

"It is about time that we raise it. Maybe, we will increase it to the price of raw water that we sell to Melaka," Astro Awani news site reported Osman as saying.

"Or maybe with further discussion, the price that will be sold to Singapore will be less than the price sold to Melaka, but it will not be at the current price that Singapore buys it now," he added.

He said Malaysia will study the water agreement with Singapore to see whether the price could be reviewed.

"This needs further discussion. I feel that if the Johor government were to raise it to a reasonable rate, Singapore will accept it, because that is our hope," he added. 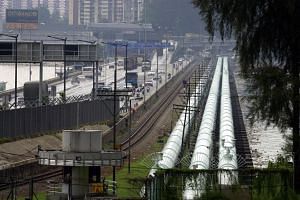 Tun Dr Mahathir had, in recent interviews, criticised the 1962 water deal as "too costly" and "ridiculous", and said Malaysia would approach Singapore to renegotiate the terms of the deal.

Dr Mahathir said last month: "We are studying the case properly and we'll make a presentation", but he said the issue is "not urgent".

Singapore's Ministry of Foreign Affairs said the 1962 treaty was guaranteed by both governments in the Separation Agreement, which was registered with the United Nations when Singapore broke away from Malaysia in 1965.

Singapore says both sides must comply fully with all the provisions of these agreements.

The water agreement, which expires in 2061, entitles Singapore to draw up to 250 million gallons a day (mgd) of raw water from the Johor River.

In return, Johor is entitled to a daily supply of treated water of up to 2 per cent, or 5 mgd of the water supplied to Singapore.