JAKARTA - Special operations units from Indonesia’s air force, army and navy are set to play a bigger role in the war on terror, following the recent spate of attacks on churches and the police across the country.

Presidential Chief of Staff Moeldoko confirmed on Monday (May 21) that the military’s Joint Special Operations Command has been reactivated.

President Joko Widodo on Friday (May 18) gave the green light for the armed forces (TNI) to support the police in counter-terrorism operations at home.

The move comes as Indonesia is reeling from the coordinated suicide bombings of three churches in Surabaya, East Java, which killed 14 people as Sunday morning services were about to begin on May 14. The local police station in the country’s second-largest city was also hit the next day.

The suicide attacks on both days were mounted by sleeper cells led by Indonesian militants loyal to the Islamic State in Iraq and Syria (ISIS).

That the attacks involved the entire families of the militants, including women and children as young as eight years old, came as a shock to many around the world.

It is unclear how the joint command, better known as Koopssusgab, will be deployed domestically. But early signs indicate that it will be modelled after the US military’s Joint Special Operations Command (JSOC), which was behind the killing of Osama bin Laden in 2011. 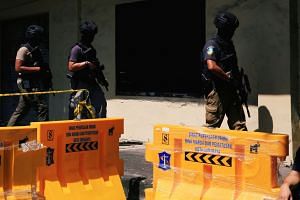 Like JSOC, the joint Indonesian command is made up of the country’s elite special operations units from all three service branches such as Kopassus (army), Kopaska (navy) and Detachment Bravo-90 (air force).

Speaking at a seminar on Indonesia’s anti-terror laws on Tuesday (May 22), Mr Moeldoko said the elite troops could be mobilised within minutes when needed.

They will fall under the command of TNI chief Hadi Tjahjanto, who will coordinate with national police chief Tito Karnavian on how and when the troops are deployed.

Koopssusgab was first set up in June 2015 by Mr Moeldoko when he was TNI commander as Indonesia was stepping up its efforts against the rising threat of ISIS.

But it was shut down a month later – in part due to concerns expressed by human rights groups – by General Gatot Nurmantyo who succeeded Mr Moeldoko as TNI chief.

The move to revive Koopssusgab continues to be criticised by groups such as the National Commission for Human Rights over worries that the military may gain excessive powers.

Mr Moeldoko tried to assuage those fears on Tuesday, telling reporters that the Koopssusgab troops would be trained to uphold human rights.

Despite the concerns, several lawmakers have come out to back the reinstatement of Koopssusgab.

Speaker of Parliament Bambang Soesatyo said he believes the President’s decision will contribute towards the fight against terrorism and radicalism.

“I fully support the efforts to eradicate terrorism by involving the elite forces of the TNI,” Mr Bambang told reporters.

Parliament is due to begin deliberating on the government’s proposed revisions for anti-terror laws on Wednesday (May 23).

The House of Representatives has been slow to move on the revisions, first mooted shortly after militants loyal to ISIS staged an attack on downtown Jakarta in January 2016.

Among the proposed changes are new laws that give the police powers to take pre-emptive measures to prevent terrorist attacks, as well as allow the TNI to join the police in counter-terrorism efforts at home.

Other proposed amendments include allowing the TNI to act on terror threats against foreign embassies, special economic zones, commercial vessels and aircraft, as well as terror cells in jungles or mountainous areas in Indonesia.

Mr Joko has threatened to push through the amendments to the Anti-Terrorism Bill of 2003 via an emergency presidential decree, or perppu, if the House continued to drag its feet on the legislative revisions.

“If Parliament by June does not complete deliberation of the draft anti-terror law that my administration proposed in February 2016, I will issue a perppu,” he said while visiting the scene of the church attacks in Surabaya last week.