Rawa Jati Sector 7 was a bustling area of Jakarta three days ago. Now, it is a ghost town, devastated by floods that have wrecked its power supply, poisoned drinking water and driven frightened residents to evacuation centres.

Four shelters to accommodate about 1,300 people have been set up in a government storage house, space under a nearby flyover, a sports hall and a community clinic.

Space is so tight that the kitchens have to be cleared at night to make way for sleeping residents, said Ms Sari Budi Handayan, a 40-year-old mother and an employee of an advertising agency.

Food is in short supply, with enough for only 200 evacuees a day. Many get help from the local government, while others are buying their own meals.

Mattresses are a luxury; most evacuees sleep on either carpets or thin mats. Some are in tents; there are no TVs and very few toilets.

While the receding waters are bringing some relief, they also highlight the huge cleanup job ahead.

Emergency response staff were seen clearing some access roads to make way for residents to return home to start cleaning and removing mud from their houses.

At one corner, a single bed was seen lying in the middle of an alley, along with pans and children's toys.

"We get floods every year, but not this big and not this early during the year," a mother in her 50s told The Straits Times.

She fears that worse is to come given that a series of small floods usually occurs in middle to late January, and become bigger in February.

"The water has receded, but we have a huge task of cleaning, and we need proper equipment to help us do it effectively," said Ms Sari, who is also the community group leader for Rawa Jati Sector 7. She has been tasked with overseeing the four evacuation shelters, although she has her own worries: She and her two children have lost practically everything, including school books and most of their clothes. Most of their furniture was destroyed, and water was neck-high on the second floor.

Rawa Jati Sector 7 is one of many low-lying areas in greater Jakarta still reeling from the floods that forced around 400,000 residents to seek refuge in shelters similar to those Ms Sari oversees. 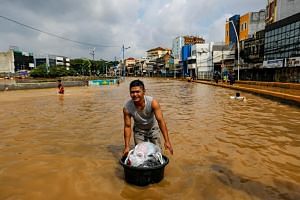 Singaporeans in Jakarta advised to prepare for possibility of more flooding

The number of evacuees has since fallen to 183,530, said the Indonesian authorities.

South Jakarta resident Ali Andri, 40, told ST that Wednesday's flood was the worst since more than 50 people died in 2007.

"The water came suddenly at dawn. The water was at waist-high level inside my house and chest-high on the street in front," said Mr Ali, adding that he managed only to move one of his two cars to higher ground on Wednesday morning.

All of his furniture was damaged, but the father of three salvaged most of the valuables.

Rescuers continued their search for missing people yesterday, with the death toll at 43.

About 50 volunteers were working at the Villa Nusa Indah residential complex in Bogor, West Java, clearing away mud and removing piles of garbage from access roads.

Mr Aulia Ibnu, a volunteer with Darussalam Peduli foundation, said some residents did not dare to enter their homes yet as mud left by the flood waters was knee-high.

In Poncol, South Jakarta, residents who live several metres from the Krukut River were undertaking their cleanup by throwing garbage into the river.

The damage and disruption in low-lying areas are in contrast with the situation in central Jakarta, which escaped the floods.

The main thoroughfares, Thamrin and Sudirman, saw a return of their regular rush-hour traffic jams yesterday after the New Year holiday.

But heavy rain is forecast to return over the next few days and more flooding is possible until the rainy season ends in April.

The government started seeding rain clouds with chemicals yesterday in a bid to avert this. Its aim is to reduce rainfall in greater Jakarta by about 20 per cent.