JAKARTA - Jailed former Jakarta governor Basuki Tjahaja Purnama has filed for divorce from his wife of 20 years, according to local media reports on Monday (Jan 8).

The reports published by news websites Kompas.com and Detik.com cited a court official and one of Basuki's lawyers, who confirmed rumours over the weekend that Basuki and his wife Veronica Tan were on the brink of separation.

Basuki, better known by his Chinese nickname Ahok, and Madam Tan have been married since 1997. They have three children - Nicholas Sean, 19;  Nathania, 16; and Daud Albeenner, 11.

A photo of Basuki's divorce papers dated Jan 5 began circulating over the weekend via WhatsApp.

The document was signed by two of Basuki's lawyers - Fifi Lety Indra who is also his sister and Josefina Agatha Syukur. It stated that Basuki is also filing for custody of their children.

Kompas.com said the divorce filing was confirmed to be authentic by Josefina. 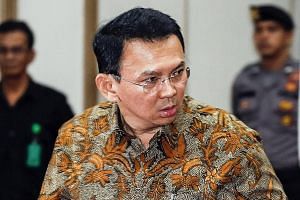 She declined to comment on the reason behind the divorce petition, saying the matter was a personal one between the couple.
The reason for the divorce has not been confirmed by the couple nor by any of their close friends.
Josefina also reportedly said the divorce trial would not be open to the public.
The news has come as a shock to many, since the couple continued to display what appeared to be a warm relationship.
On Dec 4 last year (2017), a photo of Madam Tan was posted on Basuki's official Instagram account, along with a short message to greet her a happy birthday.
In May last year, the politician was sentenced to two years in jail for blasphemy. The sentence was handed down weeks after he lost the Jakarta gubernatorial election.
Basuki was deputy governor of Jakarta before he took over as governor in 2014, after his former running-mate Joko Widodo was elected President.