KUANTAN (THE STAR/ASIA NEWS NETWORK) - The 10-year-old Malaysian boy who was found chained by his neck to a gas tank said it was his fault for coming home late from a cybercafe.

According to Datuk Shahaniza Shamsuddin, chairman of the state Women and Family Development, Communication and Multimedia Committee, the boy said his stepfather had never punished him that way before.

"From my conversation with him, he said his stepfather had disciplined him before but never gone this far. He admitted that he came home at 1am that day and his parents were mad at him.

"Nevertheless, our social workers will try to get the full picture of what really happened," Ms Shahaniza said after visiting the boy at the children's ward of Hospital Tengku Ampuan Afzan on Saturday (Oct 7).

Police had to break down the door of the house in Indera Mahkota here to rescue the boy after being alerted by the public on Thursday.

The 32-year-old stepfather, who is a soldier, and his wife have been remanded for investigations.

According to Ms Shahaniza, doctors said the boy was in good health and did not show any signs of trauma.

"He will be placed in the hospital until the case is resolved because this is currently the safest place for him. The Welfare Department and the hospital will monitor his condition and send counsellors if necessary. 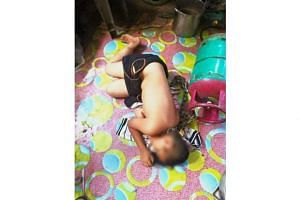 Father who chained boy by the neck raises hackles in Malaysia

"We will wait for the investigations to be completed and if needed, we will get a court order to put the boy in protective custody. Further action will depend on police and the Welfare Department's investigations," she said.

Ms Shahaniza said the boy also wanted to see his biological father, who is working in Melaka.

"We are in the midst of contacting the boy's biological father. The boy told me he last saw his father during Hari Raya last year. He misses his father so I urge his father to please visit him," she said.

In Jitra, Deputy Defence Minister Mohd Johari Baharum said the ministry would leave it to the Armed Forces chief to take action against the soldier should he be convicted.

He said the ministry was still waiting for a full report from the police. "The case is seen as physical abuse. It has nothing to do with the Defence Ministry.

"Anyhow, I cannot give my comments but just have to wait until the police investigation is over," he told reporters at a JKKK community event in Taman Bersatu on Saturday.