PETALING JAYA (The Star/Asia News Network) - The online version of the Islamic State in Iraq and Syria (ISIS) terror network's local publication is still accessible in the country and has garnered over 1,000 likes.

Launched on June 20 as Al-Fatihin Media, which means conquerors in Arabic, it provides updates of the terrorist group's activities in the Middle East for Malay-speaking supporters in Malaysia, Indonesia, Singapore, Brunei and southern Thailand.

It features Syrian martyr Abu Bilal al-Himshi, and various news excerpts on developments in Raqqa in Syria to the Philippines, information and statistics on military operations, a map of ISIS-controlled provinces, and alms collection and distribution statistics in Syria. 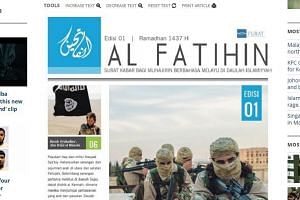 Malaysia warns against reading of publication linked to ISIS

The 20-page maiden print issue, which can be downloaded from the publication's website and Facebook page, focuses heavily on the significance of Ramadan and jihad.

The language used is a mix of Bahasa Malaysia and Bahasa Indonesia.

The first three pages carry advice, calling on ISIS fighters to continue with their jihadist activities, vie for martyrdom and kill and "crucify" polytheists, disbelievers, oppressors and transgressors.

Many of the articles and videos, which appeared on the Al-Fatihin Media Facebook page, has been translated into Malay, featuring mostly in Bahasa Indonesia.