JAKARTA - Indonesia's national police have named six new suspects linked to the violence in Jakarta last week, including three of whom were paid to kill high-profile state officials.

National police spokesman Inspector-General Mohammad Iqbal revealed at a press conference on Monday (May 27) that two of the suspects, identified only as HK and TJ, were ordered in March to murder two national leaders, and later in April to kill another two state officials.

Mr Iqbal told reporters that the people behind the plots had intended to use the murders to destabilise the country.

He said his team has established the identity of the mastermind, but he declined to elaborate as investigations are ongoing.

"We are digging deeper into the case and will provide updates later," he added.

Mr Iqbal said another suspect, identified as AZ, had received instructions in April to kill the head of a local polling company in exchange for Rp 5 million. 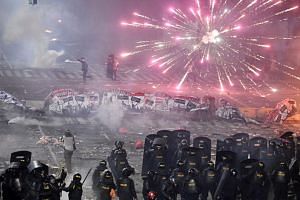 The other two suspects, one of whom is a woman, were allegedly involved in selling guns, some of which were illegal, to the three men involved in the murder plots.

The last suspect was not involved in the murder plots.

The news on Monday comes in the wake of an ongoing investigation that exposed the role of the six in last week's violence around the capital, home to around 10 million people.

A series of peaceful protests that broke out in Jakarta after the election commission (KPU) on May 21 announced official results which showed President Joko Widodo had defeated challenger Prabowo Subianto in the April 17 presidential election escalated into riots that claimed the lives of eight people and injured more than 700 people.

The national police had described the street violence as a coordinated strike and "an event by design".

They said it was planned by the rioters using WhatsApp chat groups.

As of Sunday, at least 452 rioters have been arrested, including men from neighbouring provinces Banten and West Java, as well as West Nusa Tenggara.

They were armed with metal arrows, sickles, Molotov cocktails and firecrackersduring clashes with thousands of police officers that dragged on for hours.

The violence resulted in the city being paralysed by road diversions, suspension of transportation services and the forced closure of business centres.

Mr Iqbal said that the police and the Indonesian Armed Forces (TNI) have continued to deploy around 40,000 officers in Jakarta to ensure security in the capital.