JAKARTA (THE JAKARTA POST/ASIA NEWS NETWORK) - Indonesian bureaucrats may soon face tighter competition to reach the top rungs of the career ladder, with the government planning to allow active military officers to take up positions in ministries and government institutions.

The Indonesian military, known as the Tentara Nasional Indonesia (TNI), is formulating an amendment to a legislation of the TNI law that was enacted in 2004 to permit middle- and high-ranking officers to serve in the top two levels of ministries and state institutions.

TNI commander Hadi Tjahjanto, said the revision was aimed at reorganising the military, which has been unable to provide positions to around 500 middle- and high-ranking officers.

Under the existing law, military officers can occupy civilian positions only if they are retired, and they can be placed only in offices that handle political, state security and state defence matters. These include the State Intelligence Agency, the National Defence Council, and the National Search and Rescue Agency, among others.

"In particular, we will revise Article 43 (so that) active military officers can be placed in echelon I and II positions," Air Chief Marshall Hadi said recently at the TNI headquarters in Cilangkap, East Jakarta. "We'll be able to find posts for at least 150 to 200 of the total 500 officers."

After former president Soeharto stepped down in May 1998, the TNI had to adjust its role from being a tool of the regime to becoming a professional defence force.

Soldiers were stripped of their dual defence and civilian functions that had enabled them to be involved in politics and independent businesses.

The TNI budget was controlled by the government and supervised by the House of Representatives. Furthermore, legislation including the TNI Law was aimed at reforming the military and curbing the desire of active officials to return to politics.

TNI members are required to retire from service to be permitted to take part in businesses or government institutions, or to run in elections. With soldiers now having been kept in the barracks for decades, overstaffing has emerged as a problem.

A 2017 study by the Centre for Strategic and International Studies (CSIS) estimated that since 1998, the TNI has produced a surplus of more than 100 military officers per year, mainly comprising one-star officers and colonels.

President Joko Widodo announced last week that he had agreed to open promotions for senior military officers and raise the retirement age for lower ranks. The President said there would be some 60 positions for high-ranking officers of the Army, Navy and Air Force. 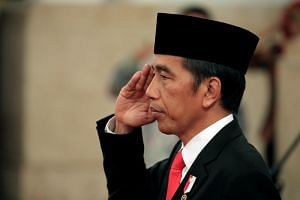 "One- to three-star military officers can serve in the 60 positions and colonels can fill (some) of the positions to be promoted to star ranks," Mr Joko said. "I have also ordered the law and human rights minister to, together with the TNI commander, revise the retirement age of enlisted personnel and non-commissioned officers from 53 to 58 years (in the 2004 TNI Law)."

Article 53 of the current TNI Law sets the retirement age for enlisted personnel and non-commissioned officers at 53, while middle- to high-ranking officers are eligible for retirement at 58.

But Ms Bivitri Susanti, a constitutional law expert from the Jakarta-based Jentera School of Law, said the plan would lead to a revival of the dual defence and civilian functions, in a setback to military reform efforts. "We have to keep the military's role separate from the civilian sphere. They should not (have a role) as public officials," she said.

Mr Ahmad Riza Patria, a lawmaker of the opposition Gerindra Party, criticised the plan, saying it could lead to conflict between the TNI and civil servants, who had built their careers from scratch.

"The military should understand that civil servants have built their careers (in ministries and state institutions) for years. If military officers can fill positions civil servants should fill, that means civil servants will lose their chance to be appointed to the posts," Mr Riza said.