JAKARTA (BLOOMBERG) - With a surge in forest fires in Indonesia threatening a repeat of the deadly haze that blanketed much of Southeast Asia in 2015, President Joko Widodo said officials failing to tackle the menace will be fired.

Jokowi, as Mr Widodo is commonly known, said he's alarmed by the increase in the number of so-called hotspots this year though it's significantly down from 2015 when a total of 2.6 million hectares of land was affected, costing the country 221 trillion rupiah (S$21.49 billion) in economic losses.

The military, police, disaster mitigation agency and others should focus on prevention and early detection of fires to curb them, he told a meeting in Jakarta on Tuesday (Aug 6).

"We'll be ashamed of facing other countries if we cannot solve the smoke problem," Mr Widodo said.

"I have told the military and police chiefs to fire whoever fails to tackle the forest and land fires. Don't underestimate hot spots, just extinguish them, don't wait until they get big."

The raging hotspots in central and western parts of the archipelago have already prompted neighbouring Singapore and Malaysia to warn of higher risks of haze this year as much of Asia reels from an unusually long dry spell.

Stinging smoke from illegal burning to clear land for palm oil and paper plantations engulfed Singapore, parts of Indonesia, Malaysia and Thailand for over a month in 2015.

Besides prompting school closures and disrupting sea and air travel in the region, the smog also forced some in Indonesia to flee their homes. 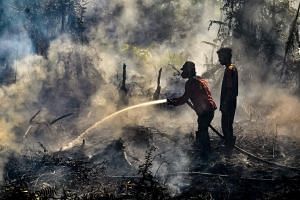 The risk of forest and land fires may persist until the peak of the dry season in September, according to Coordinating Minister for Political, Justice and Security Affairs Wiranto.

Authorities have already reported 975 hotspots this year, affecting an estimated 135,000 hectares with a decline in the air quality in some cities in Kalimantan, he said.

Mr Widodo, who has extended a moratorium on new permits to clear forest and peatlands for palm oil, asked local governments to work in tandem with federal agencies in combating the forest fires.

The president ordered emergency response teams to use drones to detect fires early and growers to adopt modern technology in farming to minimize risk of land burning.

Emergency Provincial governments of Riau, South Sumatra, West, South and Central Kalimantan, the main palm oil and rubber producing areas, have declared a state of emergency to deal with the fires.

The government has already warned of risk to its rice crop from the long dry spell that's expected to last until October.

More than 9,000 personnel from the National Disaster Mitigation Agency, the military, police, environmental groups and private companies, including Asia Pulp & Paper Co have been deployed to combat the fires so far this season.

Riau, one of the country's main palm oil-growing areas, is the worst affected province this year with fires scorching about 28,000 hectares of land already, the disaster mitigation agency said last week.

The fires in Indonesia, which are mostly lit to clear land, are extremely difficult to extinguish because of peat below the soil surface, which burns like coal and can smolder for months.