JAKARTA (THE JAKARTA POST/ASIA NEWS NETWORK) - The Elections Supervisory Agency (Bawaslu) concluded on Thursday (May 16) that the General Elections Commission (KPU) committed administrative violations in relation to the operation of its online ballot tabulation and with regard to pollsters.

Bawaslu, which conducted the examination after a report lodged by the Prabowo Subianto-Sandiaga Uno camp, said that procedural violations had led to input errors on the tabulation website, also known as Situng.

Bawaslu head Abhan said, however, that the election watchdog would not order the KPU to stop operating Situng, but to fix the procedures instead.

"In operating Situng, the KPU must pay close attention to accuracy in entering data so that it won't cause disputes," Mr Abhan said.

KPU Commissioner Wahyu Setiawan said that despite the ruling and its short deadline for a follow-up, the KPU would not delay the result announcement next Wednesday.

Article 462 of the 2017 Elections Law stipulates that the central, provincial and regency or city election commissions must abide by the Bawaslu ruling no later than three days after its delivery.

"The Situng system will not stop, and the official nationwide calculation will keep going according to plan," Mr Wahyu told The Jakarta Post on Thursday. 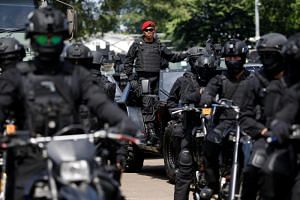 "We're still waiting for some provinces to complete their counting. We'll wait until May 18 at the latest, and we'll immediately bring them to the plenary meeting," Mr Arief said.

KPU commissioner Pramono Ubaid said the Bawaslu ruling was in line with the poll body's previous statements that there were indeed errors in the Situng data entry.

The KPU stated on May 8 that it found 244 errors on the Situng website, 68 of which were based on public reports while 176 were based on the KPU's own monitoring.

Of these, 218 have been resolved, with 26 in the process of being corrected.

"The corrections in Situng have nothing to do with our ongoing counting process. On the one hand, the counting process goes on, and on the other hand, we are improving our procedures for inputting data into the system," Mr Pramono told the Post.

Regarding pollsters, Mr Abhan said the KPU should immediately notify pollsters to submit their reports. The KPU should have sent the notification no later than 15 days after the quick-count results announcement.

The Prabowo camp has reported pollsters, accusing them of bias towards incumbent President Joko Widodo. It has demanded the pollsters report the sources of their funding.

"The KPU did not send notifications for the pollsters to submit their reports... This violates Article 4 of the Elections Law and articles 29 and 30 of Law No. 10/2019 regarding community participation in elections," he said.

Prabowo camp advocacy and legal director Sufmi Dasco Ahmad said that despite Bawaslu's decision to keep on publishing Situng, the ruling was enough to justify their allegations of electoral maladministration.

"It has been declared legally, and it is proven that the KPU has violated procedures... There are still other reports that we are currently waiting for from Bawaslu," he said.

KPU legal division member Setya Indra Arifin said the technical team at the KPU's Situng was still updating the erroneous numbers. However, it was committed to carrying out the Bawaslu recommendations no later than three days after the ruling.

"Because it is an order, a ruling. We must work towards it immediately," he said.

Mr Sufmi said his team would later submit four other reports on alleged fraudulent practices by Mr Joko to Bawaslu on the use of state institutions, the use of state resources and funding, cheating in the overseas elections, and abuse of electoral logistics, such as rigged ballots, in several areas.