The conservative region on Sumatra island - the only place in Muslim-majority Indonesia that follows Islamic law - passed a regulation on Thursday that will see criminals flogged only behind prison walls.

It is not clear when the new rule will come into effect.

Public whipping outside Aceh's mosques is common punishment for a slew of offenses, ranging from gambling and drinking alcohol to gay sex.

A hooded figure on a makeshift stage rains down lashes, sometimes as many as a hundred strokes, on the back of a grimacing criminal as large crowds of adults and children jeer and scream abuse.

Rights groups have derided it as cruel and last year President Joko Widodo called for an end to public whippings in Aceh.

Around 98 per cent of Aceh's five million residents are Muslims, subject to religious law, including the public whippings which came into practice around 2005. 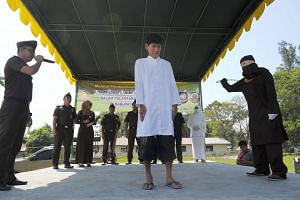 Non-Muslims can usually choose whether or not to be punished under religious law and sometimes choose a painful flogging to avoid a lengthy court process and jail term.

Under the new rules, caning with a rattan stick cannot be recorded anymore - crowds often filmed the spectacle on smartphones - and only journalists and adults can witness the punishment inside prisons.

Some locals, however, were not sold on outlawing public whippings.

"If caning is done in prison... we're sure there will be more sharia (Islamic law) violations in Aceh," demonstrator Tuwanku Muhammad said at a small protest against the new legislation in the provincial capital Banda Aceh.