"Congratulations (to Jokowi and Ma'ruf Amin). I wish Pak Jokowi and Pak Ma'ruf Amin great endeavours ahead and to keep striving to achieve social justice for all Indonesians," he said in the video posted on his account on Sunday (June 30).

It came after the country's Constitutional Court ruled last Thursday to uphold the results of the presidential election that handed Mr Joko a second term, dismissing a challenge by presidential candidate Prabowo Subianto and his running mate, Mr Sandiaga, who had claimed they were robbed of a victory. The court's decision is final and binding.

In the video, Mr Sandiaga acknowledged the fact that in every election, there must be a winner and a loser. While losing the election was saddening, he asked all Indonesians, including his voters, to see the situation as evidence of their devotion and sincerity to the nation.

"We understand that those who have not been elected, or who are not declared winners, will certainly feel disappointed... Because we really want to play a role in building and advancing the nation, it is only natural that we are disappointed," he said in the six-minute video.

"I am asking (all of you) to keep in mind the positive energy and that noble purpose. Our endeavour shall continue," he said. 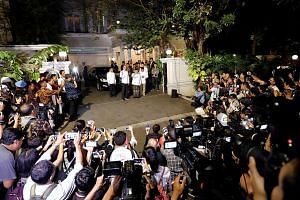 Mr Sandiaga reminded his voters and others that doing good for the nation should not be limited to taking on government roles.

"The struggle to advance the nation and the state does not always have to be done from within the government structure," he said.

"After this (ruling), I hope all elements (in Indonesia) reunite, work side by side to bring Indonesia forward," he said. "Differences in political views should not separate us."

Disappointments, he added, should not stop citizens from advancing the nation's interests.