JAKARTA - The Indonesian militant arrested in Batam on Saturday in connection with a plot to fire a rocket on Marina Bay was planning to travel to Singapore to work as a cleaner, police said on Monday (Sept 5).

Riau Islands police chief Sam Budigusdian told reporters at a press conference on Monday that the suspect said during questioning that he had a job with a cleaning service operator on the resort island of Sentosa.

The 24-year-old was apprehended by commandos from the elite Detachment 88 counter-terrorism unit at an Internet cafe in Batu Aji in Batam last Saturday morning.

The police later seized an airsoft replica of an assault rifle, along with an Indonesian passport, two mobile phones, religious books, as well as other personal items during a search of his home at the Carina housing estate nearby.

The police would only refer to the suspect by the initials LH, but a community leader identified the suspect as Leonardus Hutajulu.

Leonardus, who is a Batak from North Sumatra, is said to be a member of the Batam-based Katibah Gonggong Rebus (KGR) or Boiled- Snails Cell. 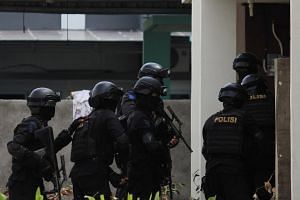 The police previously said Gigih, a 31-year-old factory worker, had planned the rocket attack under the direction of Indonesian militant Bahrun Naim, who is believed to be in the Middle East fighting for the Islamic State in Iraq and Syria (ISIS).

General Sam said police investigations into the case have uncovered evidence that Gigih had established the "elevation points" from which to launch the rocket attack at Marina Bay from Batam.

The rocket attack plot was foiled after Gigih and four KGR members were arrested in Batam on Aug 5. Follow-up raids at their homes found weapons such as a bow and arrow and an airsoft gun modified to resemble an AK-47 assault rifle but no rocket was found.

The police said Leonardus had joined other KGR members for drills using airsoft guns in preparation to fight with ISIS militants in Syria.

Investigations are ongoing into the group for the terror plot, as well as for helping Indonesians travel to Syria, and smuggling or harbouring Uighur militants in Batam.