JAKARTA (THE JAKARTA POST/ASIA NEWS NETWORK) - The Indonesian rupiah plunged to a record low of Rp 15,000 per US dollar on Tuesday (Oct 2) at noon, the lowest rate since the 1998 financial crisis, as a result of a combination of pressures such as the escalating US-China trade war and rising oil prices that may increase the country's trade deficit.

The drop came as a blow to Bank Indonesia (BI), which increased its benchmark interest rate five times since May to defend the rupiah. The latest hike was on Sept 27, when BI increased its policy rate - the seven-day reverse repo rate - to 5.75 per cent.

The central bank's decision was consistent with efforts to maintain the current account deficit at a safe level, said BI Governor Perry Warjiyo.

PermataBank economist Josua Pardede said the drop in the rupiah was attributable to two main factors - the US' upper hand in its trade war with China and rising global oil prices.

Since the US began imposing trade sanctions on Chinese products in July, the US dollar index - a measure of the US dollar's value relative to a basket of foreign currencies - has climbed 5 points to 95.5 from 90.05 in April.

Furthermore, the US has escalated sanctions on China by coaxing Mexico and Canada to join the imposition of trade restrictions on Chinese products via a new North American trade deal.

Meanwhile, global oil prices have risen significantly since April, straining the country's already gaping US$1.52 billion deficit recorded in May - one of the highest among emerging economies.

Josua referred to crude oil benchmarks, Brent and West Texas Intermediate, the prices of which stood above US$85 and US$75 per barrel respectively on Tuesday, far higher than US$64 and US$63 respectively on April 1.

"These have potentially negative effects for net oil importing countries (such as Indonesia) because they will pressure their current account deficits," said Josua on Tuesday as reported by kompas.com.

Data from the Energy and Mineral Resources Ministry shows that Indonesia required 1.3 billion barrels of oil per day in 2017, out of which 59 percent was produced locally while the other 41 per cent was imported. 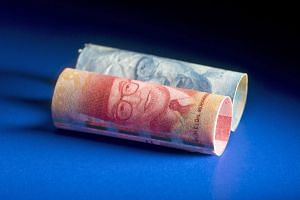 The government's most recent attempt to reduce oil imports was the requirement that all diesel sold within the country be 20-percent palm oil-based. The move, effective Sept 1, is expected to reduce the country's foreign exchange spending by US$5.6 billion annually.

The government has also introduced an array of measures to reduce the current account deficit, which hit US$8 billion in the second quarter, equal to 3 percent of gross domestic product.

The measures include a higher tax on 1,147 foreign-made consumer goods and a temporarily halt of infrastructure projects that rely heavily on imported goods.

Commenting on the rupiah's slump, Finance Minister Sri Mulyani Indrawati told reporters at the Presidential Palace on Tuesday that the government and BI would continue monitoring the rupiah and major economic indicators, including the resilience of the banking industry.

"Based on (banks') capital adequacy ratio, non-performing loans and lending rates as of this October, it seems the adjustment to 15,000 is going well," she said, hinting that domestic banks might have anticipated that level.

Piter Abdullah, research director at the Center of Reform on Economics, concurred with Josua of PermataBank that the strengthening US dollar and rising oil prices were the main factors behind the rupiah's fall.

He said the rupiah's slide was predictable considering contemporary global economic uncertainty because of the US-China trade war combined with the trade deficit.