BANDUNG/KUPANG - Polling day across 171 regions in Indonesia got off to a peaceful start on Wednesday (June 27) with the usual festivities which typically accompany elections in the world's third largest democracy.

By 11am, most of the leading gubernatorial candidates in West Java including Bandung mayor Ridwan Kamil, and the pairing of veteran actor Deddy Mizwar, 63, and Purwakarta regent Dedi Mulyadi, 47, had cast their votes.

Mr Ridwan, 46, turned up at a polling station in Bandung wearing the jersey of the Spanish football team currently playing in the World Cup in Russia. His wife Atalia Praratya, and son Emmiril, were in the colours of the Portugal and England teams.

A large crowd greeted former social affairs minister Khofifah Indar Parawansa as she arrived at a polling station in Surabaya.

The front runner in the East Java gubernatorial polls had walked from home to a cemetery where her parents and husband are buried to pay her respects before casting her vote. "I'm used to walking," she told reporters.

Voters started streaming into polling stations in 17 provinces, 39 cities and 115 regencies across the country from as early as 7am local time, with some met by tight security after police recently foiled at least two terror plots targeting the elections.

Over 150 million registered voters, or more than half of Indonesia's 260 million population, will be electing their governors, mayors and regents, in this last of a three-part direct election, which started in December 2015.

Observers have said that these regional elections, which locals call Pilkada, are expected to set the stage for next year's parliamentary and presidential elections when President Joko Widodo is expected to seek a second term in office.

The polls in Java are also seen as proxy battles between President Joko and his most likely opponent next year, former general Prabowo Subianto, who lost in the 2014 presidential election.

Opinion polls suggest candidates backed by parties supporting President Joko are likely to win in key provinces such as West Java, but observers will be watching for signs of Islamist influence after a bitterly fought and divisive contest for the Jakarta governorship last year.

Voting got off to a slow start in West Java, a province with pockets of conservative Muslim voters, although it picked up later in the morning.

Retired civil servant Ndang Heriyanto, 60, who lives in Cihaurgeulis in Bandung, told The Straits Times that he is generally happy with the government and sees all four gubernatorial candidates as good.

However, he is deciding between lawmaker Tubagus Hasanuddin, who is backed by the ruling Indonesian Democratic Party of Struggle (PDI-P), or retired two-star general Sudrajat, who is a close ally of Mr Prabowo.

"No leader would intentionally put out bad policies and no leader would harm his people, it would backfire on him," said Mr Ndang. "Since all four (gubernatorial) candidates are good, I would select based on religion, and (Tubagus and Sudrajat) are the stronger Muslims."

The polls come amid heightened security following a series of suicide bombings in Surabaya, as well as other threats on polling stations by terrorists from the Jemaah Ansharut Daulah (JAD).

Less than a week ago, JAD spiritual leader Aman Abdurrahman was sentenced to death for inciting an attack in Jakarta two years ago, as well as at least four other JAD strikes across the country. 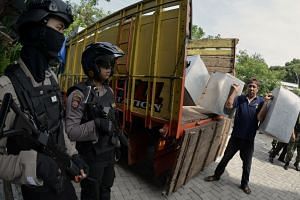 Indonesia on high alert as voting starts in regional elections 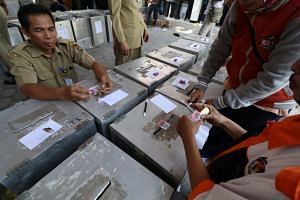 Hottest contest being fought in Indonesia's most populous province

Concerns about retaliatory strikes following the verdict was also why more security personnel have been mobilised to secure the elections, according to police spokesman Setyo Wasisto.

"We are carrying out regular police operations and we have deployed 171,000 alongside the military," he said.

Polls elsewhere across the country were relatively uneventful, including the five potential hot spots identified by the police previously in North Sumatra, West Kalimantan, South Sulawesi, Maluku and Papua.

In its capital, Kupang, at least one police officer was deployed to stand guard at each polling station.

"So far, the situation remains safe and the election has been running smoothly this morning," Kupang's Oebobo district police chief Yulianus Lau told The Straits Times.

The Oebobo police oversees the security of 103 polling stations, including one where Ms Emelia Julia Nomleni, one of the provincial gubernatorial candidates, had cast her vote.

The official results of these polls will be released by the Election Commission on July 9.

But quick counts based on early counting of a sample of votes from various polling stations can be expected in a few hours after polls close at midday.