In a copy of the Aug 18 ruling seen by The Straits Times, the firm, or MPL, was found to have illegally cleared natural forest to turn it into a plantation and felled protected trees spread over 5,590 ha within its concession in Pelalawan regency, Riau province. The environmental destruction resulted in state losses of over 12 trillion rupiah.

It had also illegally cleared 1,873 ha of land outside its logging licence, causing a further loss of 4 trillion rupiah, said the ruling.

The violations were committed between 2004 and 2006. "This unlawful act had resulted in ecological losses to the state and to the Indonesian people so the plaintiff's lawsuit was upheld," it said.

The latest verdict ended a three-year legal battle between the Environment and Forestry Ministry and the company, which has been a supplier to Singapore-based pulp and paper giant April.

The ministry had sued the company in 2013, but the case was rejected by the Pekanbaru district court in March and the Pekanbaru High Court in November the following year. It subsequently filed an appeal to the Supreme Court.

Ministry spokesman Novrizal Tahar told The Straits Times on Thursday (Nov 17) the value of damages was "the biggest in the history of Indonesia".

Another official, director-general of law enforcement Rasio Ridho Sani, said in a statement that the ruling "corresponded to a sense of justice for the environment".

"This decision will hopefully give a deterrent effect to others. The ministry will take immediate steps to execute the follow-up action," he added.

In a statement received by ST on Thursday, April said it is not affiliated to MPL and has not sourced fibre from the company since February last year (2015). 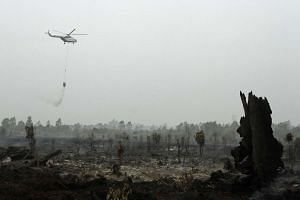 After the devastating haze last year which affected millions in South-east Asia, the Indonesian government has been getting tough on firms, mostly palm oil and pulpwood companies believed to be using illegal slash- and-burn techniques to clear land.

The latest ruling follows a similar victory for the ministry against a corporation earlier this year.

Green groups said they appreciated the court's verdict although it took some years.

"Indeed, the price of environmental damage is not cheap. The sum commensurated with the damage done," said coordinator Woro Supartinah of local group Jikalahari.

But more importantly, the ministry must ensure that the firm does not try to delay payments and should evaluate or revoke its current permit, Ms Yaya Nur Hidayati, executive director of Indonesian Forum for the Environment (Walhi), told ST.

She said the penalties "must be swiftly executed" to ensure that the law is enforced against the perpetrator and the punishment has a deterrent effect, she said.