Indonesia's Disaster Mitigation Agency said more than 3,600 fires have been detected on Sumatra and Borneo islands by weather satellites, leading to very poor air quality in six provinces with a combined population of more than 23 million.

Nearly every year, Indonesian forest fires spread health-damaging haze across the country and into neighbouring Malaysia and Singapore.

The authorities have deployed more than 9,000 people to fight the fires, which have razed more than 162,000ha of land in the provinces of Riau, Jambi, South Sumatra, West Kalimantan, Central Kalimantan and South Kalimantan.

Several thousand schools in the capital and three other cities and districts have been closed since Tuesday.

The fires burned parts of the Tesso Nilo National Park in Riau, home to about 140 endangered wild elephants, according to Mr Edward Sanger, the local disaster agency spokesman.

The authorities in Jambi, another province on Sumatra island, also ordered several thousand schools to close. 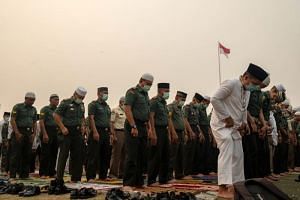 Indonesia says it's not to blame for Malaysian haze

Haze in S'pore may be back to stay: Winds, dry weather and persistent hot spots in Sumatra to blame

About 8,000 people have suffered respiratory problems in the past week alone, according to Jambi's health office.

The Disaster Mitigation Agency said satellites have detected about 5,062 hot spots nationwide, with the largest number in Central Kalimantan on Borneo island. It said 37 helicopters have dropped nearly 240 million litres of water as part of the firefighting efforts.

The haze is an annual problem for South-east Asia. Record Indonesian forest fires in 2015 spread haze across a swath of South-east Asia, and according to a study by Harvard and Columbia universities, hastened 100,000 deaths.

The fires are often started by smallholders and plantation owners to clear land for planting.

Many areas of Indonesia are prone to rapid burning because of the draining of swampy peatland forests for pulp wood and oil palm plantations.