JAKARTA (THE JAKARTA POST/ASIA NEWS NETWORK) - President Joko Widodo has concluded a two-day journey to different cities in Kalimantan on Borneo island in search of options to set up a new capital, after his administration decided to move ahead with a plan to create a new administrative hub away from overcrowded Jakarta.

He said he was assessing the "feel" of each city touted as an option for the new capital.

Upon completing the two-day city-hopping trip across the island, the President seemed impressed with at least two locations: Bukit Soeharto in East Kalimantan and the Triangle Area near Palangkaraya in Central Kalimantan.

The mention of the two options, however, raised concerns among environmentalists that moving the centre of government to Kalimantan might lead to environmental disasters in or around the new capital.

The Triangle Area is located in Palangkaraya, Katingan regency and Gunung Mas regency. The Presidential Office previously stated that an area of 300,000ha had been earmarked by the provincial administration as an option for the new capital.

It was believed to be a suitable site for building a new political and administrative hub, because it was vast in size and known to be relatively free from natural disaster risks.

Meanwhile, Bukit Soeharto is a 61,850ha forest area located near the mid-point of the toll road connecting Samarinda and Balikpapan, the two largest cities in the province, both of which have airports. 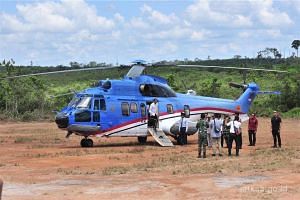 According to a 2007 forestry ministry regulation, the area has been declared a grand forest park, which functions as a conservation area.

Mr Dwi Sawung of the Indonesian Forum for the Environment (Walhi) was among the first experts to raise concern over the potential environmental ramifications if either of the two areas were turned into a new major city.

"Most land in Kalimantan is peatland. They might need to do preliminary work, like digging and solidifying the peatland, before starting to construct infrastructure for the new capital," Mr Dwi said.

Such changes to the peatland, he added, could threaten existing carbon reserves and worsen global warming, despite the government's attempts to mitigate climate change.

Massive land clearing around the site of the new capital could exacerbate the situation.

Bukit Soeharto has been declared a taman hutan rakyat (grand national park) or tahura, according to a 2007 forestry ministerial regulation, as the area was meant to be preserved as conservation area. However, the area has been scarred by illegal logging and the opening of plantations by residents for years.

"Despite current conditions, further land clearing would worsen the (environmental impact). It might lead to flooding similar to (that often seen in) Jakarta."

"Therefore, the government should conduct a comprehensive study on the project's impact on the environment of the new capital, as well as its economic benefits," Mr Arief said.

Presidential spokesperson Johan Budi said the government would soon form a joint team of officials from ministries and state institutions, which would be tasked with spearheading the further assessment of each location considered for the new capital.

"The assessment will be extensive, not only in terms of demography or geography, but it will also cover an environmental assessment, such as to find out whether or not (cutting down forest areas) would cause floods," Mr Johan told The Jakarta Post.

The team would be responsible for advising the President on which location was most suitable for setting up a new political and administrative hub, including deciding on infrastructure development and the funding scheme, he said.

The president's trip to East Kalimantan and Central Kalimantan would not be the last in the quest to survey possible cities for the new capital, and the president was also set to visit other locations soon, Mr Johan added, without elaborating.

The government, however, would need to sit down with lawmakers to discuss the details of the plan, including the new location of the capital city as well as the budget needed for the move, before it could be finalised.

"There is still a lengthy process ahead before the relocation can take place, including the deliberation at the House as well as the process of moving itself," Mr Johan said.