JAKARTA - Presidential challenger Prabowo Subianto has vowed to lift poor Indonesians out of poverty, calling it a paradox that they are living in a country rich with natural resources.

In his first major speech of the election campaign, the retired army general laid out his vision of a "Victorious Indonesia", with a people-centred economy as his top focus.

"We must realise a just economy that brings prosperity to all our people, not only a few," he told his supporters in Jakarta on Monday (Jan 14).

He was speaking just days before he and his running mate, former Jakarta deputy governor Sandiaga Uno, take part in the first of five presidential debates on Thursday.

The April 17 election is the second presidential bid for Mr Prabowo, who lost to incumbent President Joko Widodo in 2014.

Noting the economic challenges faced by South-east Asia's largest economy, he said: "If we are not careful, if we are not vigilant, if we do not change, if we do not act immediately, this situation will worsen."

One of his goals is for Indonesia to achieve self-sufficiency in food, energy and water and to develop stronger government institutions as part of a "big-push strategy", he said. 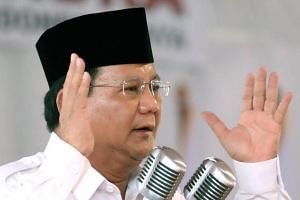 To address the country's concerns, he proposed five areas of focus.

Besides realising a people-centred economy, the others include improving the quality of life and social welfare so as to reduce the rich-poor gap, and ensuring justice in law and quality democracy.

As part of the economic focus, Mr Prabowo said the aim is to create jobs, raise people's purchasing power and promote industrialisation, including the production of high-technology products such as cars, helicopters and warships.

"Industrialisation is a must for our country. We will make Indonesia like India and South Korea, which have world-class industrial companies," he said.

He also proposed plans to convert millions of hectares of degraded forests so they can be used for food production and energy generation, and to establish special banks for farmers and fishermen to give them access to funding and technology.

Other plans include improving healthcare services, raising the salaries of those working in the health and education sectors, and providing free milk and lunch for school children because malnutrition leads to retarded growth.

"He talked about... the economy and poverty, and ways to overcome the problems, such economic inequality," she told The Straits Times. "His speech offers fresh ideas and new hopes."

Dr Siti noted that the ideas came from the Prabowo team's on-the-ground engagement with ordinary people such as traders, farmers and fishermen around the country, and may attract swing or undecided voters.

Mr Arya Fernandes, a political analyst from Centre for Strategic and International Studies, however, thinks that Mr Prabowo's speech lacked focus because he was trying to cover too many issues.

"If only he had focused on economic issues, the speech could have been much more interesting and given a new perspective on economic ideas," said Mr Arya, who added that Mr Prabowo's speech should have targeted swing and undecided voters.

About a fifth of 193 million eligible voters are still undecided, and their support could go either way, according to Gadjah Mada University political analyst Kuskridho Ambardi.

A survey by Jakarta-based pollster Indikator Politik Indonesia last month showed support for the Prabowo-Sandiaga team had risen to nearly 35 per cent, up 4.8 percentage points from October.