Repatriated earnings could help South-east Asia's largest economy refill its declining foreign exchange reserves, which the central bank has been using to keep the rupiah from falling too sharply amid a heavy selloff in emerging market currencies.

The President on Thursday met with executives from about 40 exporters, including Mr Budi Hartono, the owner of cigarette maker Djarum, chief executive of Indofood Sukses Makmur Anthony Salim and chairman of GarudaFood Group Sudhamek Agung for two-and-a-half hours to make his case, according to several media reports.

"We hope they keep their export earnings in Indonesia. If they have to use it to buy raw materials and imports, the FX could be used... but we hope the rest can be kept in Indonesia and be converted to rupiah," Finance Minister Sri Mulyani Indrawati told a press briefing.

BI in 2012 ordered exporters to receive their payments through local banks, in the hope that some of the money would stay in the country and be converted into rupiah. However, some still prefer to keep their earnings abroad.

Ms Indrawati said BI and the government will continue to maintain close communication with the business community, while monitoring whether they need to issue new policies on the matter. She did not elaborate.

BI Governor Perry Warjiyo has repeatedly said he has no plans to implement tougher rules for export earnings. 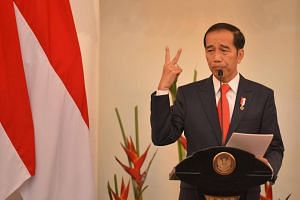 Between February and June, forex reserves had declined US$12.2 billion (S$16.63 billion) or about 9 per cent, according to Bank Indonesia (BI) data, yet the rupiah is still down more than 6 per cent in 2018.

The currency was trading near its weakest level in nearly three years on Friday, at 14,460 a dollar.