​His comments came after Indonesian police said earlier on Friday they had arrested the six suspects in Batam, including the group's leader whom police said had been plotting the attack.

The Home Affairs ministry said it had been aware of the plot and had been coordinating closely with the Indonesian authorities to monitor the activities of the group and to apprehend those involved.

It added that the police and other agencies have stepped up inland and border security measures.

Mr Shanmugam said of the plot: "This does not come as a surprise. I have spoken several times, about plans being made in places just outside Singapore, to target Singapore – we were serious about the threats.

In separate comments posted on Facebook, Mr Shanmugam referred to the example of Molenbeek, the Belgian town from which the November 2015 Paris attacks were planned.

"There are several possible Molenbeeks around us, from which attacks can be launched on Singapore. These include the Riau islands. Terrorists who will seek to come in through our checkpoints; they will also try to launch attacks from just outside. And this is in addition to lone wolf attacks from radicalised individuals/groups."

Mr Shanmugam, who will attend a regional security conference in Indonesia next week, said Singapore is grateful for the actions the Indonesian authorities have taken.

He called for Singaporeans to be extra alert, highlighting SGSecure, a national movement that will seek to mobilise the entire community into being more security conscious and involved.

"We have to emphasise the importance of SGSecure, and the role that everyone has to play," he said. 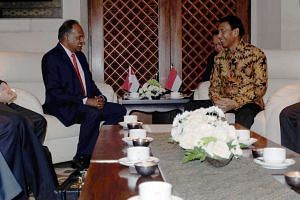 Indonesian national police's elite counterterrorism unit, Densus 88, and Riau Islands police arrested the leader of the six suspected militants, Gigih Rahmat Dewa, in a raid that started at 5am (6am Singapore time) and lasted around 3.5 hours.

Gigih, a 31-year-old native of Solo in Central Java who works at an electronics factory in Batam, was the last of the six suspects to be caught.

He was arrested along with his wife and baby. Police also seized several items from his home, but declined to disclose details as investigations are ongoing.

A neighbour, Ms Sundari, said a bomb was among the items. "There are some items taken from his house, including a bomb which has already been assembled. That's what the police told us," she added.

Ms Sundari said Gigih had been living in the house, which belongs to his elder brother, since 2011.

"He keeps to himself after he got married. He seldom turns up for neighbourhood meetings," Ms Sundai said.

Indonesia's national police spokesman Boy Rafli Amar earlier told reporters that Gigih and Muhammad Bahrun Naim, an Indonesian militant believed to have been fighting alongside the Islamic State in Iraq and Syria (ISIS) and plotted the Jakarta terror attacks in January, "previously planned to launch a rocket from Batam to Marina Bay Singapore”. The group, whom the police have identified only as KGR @ Katibah GR, is accused of harbouring two Uighurs, one of whom is linked to the suicide bomber who tried to attack a police station in the city of Solo in Central Java on July 5.

The bomber, Nur Rohman, had taken the Uighur, identified only as Ali, from Batam to Bogor and then to Bekasi, where the latter was left with an Indonesian militant named Arif Hidayatullah, alias Abu Musab. 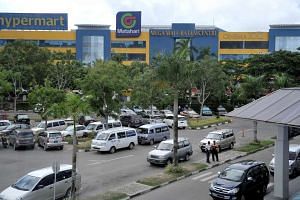 They were both arrested on Dec 23 in Bekasi on the outskirts of Jakarta. Ali was being primed as a suicide bomber in an attack planned for that same month. Arif is now in a maximum detention facility in Kelapa Dua, located not far from Jakarta. 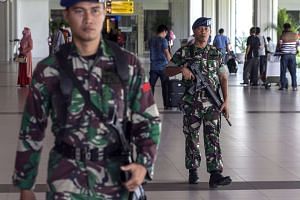 The second Uighur, identified as Doni, has since been deported.

Nur Rohman, a 30-year-old Solo native, learned to build bombs from Bahrun, who remains in close contact with domestic terror cells and militants in Indonesia. He received instructions on how to assemble the improvised explosive device (IED), which contains ball bearings and screws, used in his suicide attack from Bahrun via smartphone messaging app Telegram, a source said.

Gigih, meanwhile, is suspected to have received and channelled funds for radical activities from Bahrun, Mr Boy Rafli added.

He also helped Indonesian Muslim "brothers" to travel to Syria to fight with ISIS via Turkey, with the assistance of Indonesians in the latter country, Mr Boy Rafli said.

Indonesia security forces are focusing on domestic terror networks and smaller militant cells trying to take over the mantle from Jemaah Islamiyah.

ISIS has also started to bare its teeth in the country through local proxies who have made no secret that police officers are among their top targets.

Indonesian intelligence officials are tracking the movements of Uighurs in the Riau Islands, which comprises Batam and other islands, over fears that they may join local militant groups and mount attacks in the country.

Militants from the Muslim ethnic group in China have been known to make the long journey from the far western Chinese region of Xinjiang to join Islamist extremists in Indonesia.

"Since 9/11, the SAF has paid very close attention to aerial threats and has upgraded our air defence systems.

"Despite their arrests, this most recent plot shows how important our efforts are and why we must continue to protect our island," Dr Ng said on Facebook.

"We should assume that there may be more plots, other terror cells on the lookout for ways, and new munitions to penetrate our defences.

"Terrorism is a global problem and no country is immune. We have to stay vigilant and keep improving our defence systems. Most importantly, we must remain united to protect what we treasure on this island home."

"We must always remember that we have to get it right, first time every time, all the time; while the attackers only need to get it right one time, anytime," he wrote on Facebook.

"Our safeguard is eternal vigilance by our security agencies and every Singaporean," he added. "Even should they ever succeed in their plot, we must never let them destroy our unity or deprive us of our normalcy."