JAKARTA - A set of interconnected problems from design and certification flaws to insufficient information about the airplane system from the manufacturer contributed to the crash of a Lion Air Boeing 737 Max aircraft last October, Indonesian investigators said on Friday (Oct 25).

The National Transportation Safety Committee (KNKT) listed nine factors which caused the ill-fated aircraft to plunge into the Java sea, killing all 189 passengers and crew aboard.

"Incorrect assumptions" were made about the ways the MCAS functioned and how pilots would respond to it, Mr Nurcahyo Utomo, the KNKT's head of air safety investigation, told a news conference on Friday.

The system's reliance on a single angle-of-attack sensor had been seen as "compliant to certification criteria", he said. That angle is a key flight parameter that must remain narrow enough to preserve lift and avoid an aerodynamic stall.

"We see that by depending on this single sensor, the system is more vulnerable to disturbances because the sensor can be damaged, or experience other problems," Mr Nurcahyo added.

The highly-anticipated report by Indonesian investigators comes as Boeing, the aircraft manufacturer, is facing tighter scrutiny over the 737-Max amid concerns over about US regulatory procedures on air safety.

The Lion Air plane, which was bound for the tin-mining town of Pangkal Pinang in the Bangka Belitung Islands province, crashed into the Java Sea just a few minutes after take-off from Jakarta.

It was the second-worst air disaster for Indonesia after the crash of a Garuda Airbus A300 near Medan, in North Sumatra, which killed 234 people in 1997.

Less than five months after the disaster in the Java Sea, in March this year, an Ethiopian Airlines Boeing 737-Max crashed just six minutes after take-off, killing all 157 passengers and crew aboard. 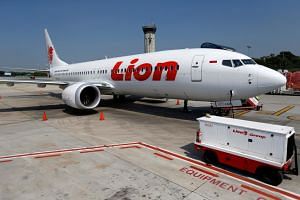 The two incidents prompted a worldwide grounding of the aircraft which was a best-selling plane for Boeing.

The US-based Boeing, the world's largest airplane manufacturer, which has since acknowledged that MCAS and a faulty sensor played a role in the crashes, has said that it has made improvements to the plane to allow it to resume operation. The grounding of the plane is estimated to have cost the aircraft maker US$9.2 billion (S$12.54 billion).

The KNKT's report also revealed that Boeing did not provide guidelines about the MCAS, both during training on the new aircraft and in the manual provided, and this, in turn, led to pilots not being familiar with the system.

The other factors which Indonesian investigators said contributed to the crash included the inability of the pilots to manage multiple alerts, repetitive MCAS activation and distractions in the cockpit.

The lack of communication between the pilot and co-pilot was also to be blamed, the investigators said. Both were preoccupied "with their own tasks" while searching for information about troubleshooting and controlling the airplane operation.

The Lion Air plane had suffered similar technical issues on the night before the ill-fated flight but the pilots of that flight had managed to overcome them.

In its report, the KNKT outlined 25 recommendations to related parties including Lion Air, as the operator of the aircraft, Boeing, as the builder of the plane, Indonesia's aviation authority, the US Federal Aviation Administration (FAA), the International Civil Aviation Organisation and Batam Aero Technic and Xtra Aerospace, which carry out maintenance on aircraft in Indonesia.

The committee, for instance, advised Boeing to better assess and test its new aircraft designs, and recommended that Lion Air manage recurring problems. It also suggested that the FAA change its regulations on aircraft design, certification and guidelines on what information should be available in manuals used by pilots and technicians.

KNKT chief Soerjanto Tjahjono, has emphasised that the report cannot be used for legal claims in court as well as for compensation by families of the victims.

"KNKT investigation does not seek who is at fault… Our explanation cannot be used at the court," he said.

Responding to the report, Lion Air spokesman Danang Mandala Prihantoro thanked the KNKT for its hard work and diligence in investigating the accident.

"It is essential to determine the root cause and contributing factors to the accident and take immediate corrective actions to ensure that an accident like this one never happens again," he told The Straits Times.