JAKARTA - The Indonesian government has dismissed an allegation that the authorities rigged last week's presidential election.

Coordinating Minister for Political, Legal and Security Affairs Wiranto said on Wednesday (April 24) that such a crime was impossible to carry out and had never crossed the government's mind.

The former armed forces chief also appealed to everyone not to easily believe misleading claims, or even worse, be provoked into committing acts that disturb peace and national security.

The allegation was made by the camp of Mr Prabowo Subianto, the sole candidate challenging incumbent President Joko Widodo in the election last week. Mr Prabowo himself has made repeated early claims that he won a big majority, citing internal vote counting.

But early quick counts by pollsters, which have proved reliable in the past three elections, have shown Mr Joko winning re-election by a comfortable margin. Official results are due by May 22 at the latest.

Indonesian law stipulates that "Parliament picks the commissioners of KPU and Bawaslu. They are not appointed by the President", Mr Wiranto said, referring respectively to the general election commission (KPU), which carries out the election, and the election supervisory agency (Bawaslu), which functions as the watchdog of the five-yearly polls.

"It has never crossed our mind to intervene in KPU and Bawaslu, let alone commit vote-rigging structurally, systematically and massively to make a certain presidential pair win," Mr Wiranto added. 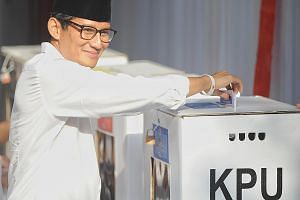 Win or lose - Prabowo ally still a man to watch

Indonesia election: Indonesians in Singapore give Jokowi 87% of their votes

The contest was a rematch, as both Mr Joko and Mr Prabowo were also up against each other in the previous presidential election in 2014. Mr Joko garnered 53 per cent of the votes in 2014, but Mr Prabowo still claimed victory then.

His campaign team filed a challenge at the Constitutional Court, alleging that the election was rigged. The court turned down the petition, ruling that the claimed vote rigging was minor and did not affect the overall result.

Since the recent election, supporters in both camps have been celebrating victory, raising fears of tensions and divisions in society.

Mr Joko has acknowledged the quick count results but has not claimed victory outright. He has instead appealed to his supporters to wait for official results from the KPU.

Around noon on Wednesday, scores of Mr Prabowo's supporters held rallies outside Bawaslu's headquarters in the centre of Jakarta, holding banners, some of which said that people were angry and that election fraud amounted to being a traitor.

At his media briefing, Mr Wiranto said Indonesians should be proud that the April 17 election was among the largest and most complicated in the world and acknowledged by the global community, even though some casualties were reported.

Mr Wiranto said 139 polling station officials were confirmed dead, many due to exhaustion. The election commission had earlier said that more than 500 officials fell ill after the vote.

The election was Indonesia's first simultaneous presidential and legislative polls. In the legislative elections, more than 240,000 candidates ran for more than 20,000 posts at the national, provincial, regency and city parliaments.

"We witnessed the elections went smoothly and peacefully, and appreciation was given to us by 33 countries which based their evaluation on their observers who came here. They did not just make something up to express such appreciation," Mr Wiranto said.