JAKARTA - Indonesian President Joko Widodo has called on all related parties, including provincial governors, to help farmers acquire equipment such as excavators and tractors to ensure they do not resort to the slash-and-burn method when clearing plantation land.

"Let's change the mindset of our farmers who, for long decades, have cleared lands by burning to (shift to) using tractors, excavators, without creating fire," Mr Joko said in a speech on Tuesday (Aug 6) at the presidential palace that was attended by local elected leaders, police and military chiefs from provinces prone to forest fires.

Mr Joko's remarks were triggered by a comment from a local police chief from a regency in West Kalimantan who suggested Indonesia amend a law passed a decade ago, which allows every traditional farming household to clear their own plantation land not greater than two hectares by slashing and burning, saying the leniency was "local wisdom".

The 2009 law on the environmental protection and management allows controlled burning, under clause No. 69, where canals must first be dug up around the plantation to prevent fire from spreading.

The controversial clause in the law has widely been criticised and has exempted traditional farmers from being prosecuted for committing the illegal slash-and-burn method.

And there is no guarantee that fires will not spread.

"We have to have courage to change our traditional farming method to a modern method that uses technology. It is the job of regents, provincial governors, ministers and all of us," Mr Joko stressed, adding that in the past five years, the agriculture ministry has been distributing tractors, excavators and bulldozers as aid packages to regions with vast plantation lands.

Indonesia has a 34 provinces, each of which is made up of regencies and cities.

Provincial governors and regents must ensure farmers in their respective areas are properly equipped and if they are not, the elected officials should put in a request with the agriculture minister for the necessary equipment, said Mr Joko, who is popularly called Jokowi at home. 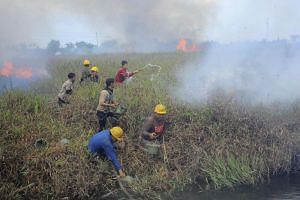 To amend a law or propose a Bill in Indonesia normally takes several years and Parliament must assign committees to work with the government to deliberate any proposed Bill - including those for amendment - before it can be ratified into law.

"It is impossible for any farmer to clear a 2ha land by shovelling. They should be assisted, otherwise they would resort to burning," Mr Joko argued.

He also said on Tuesday that he had phoned armed forces commander Marshal Hadi Tjahjanto and national police chief General Tito Karnavian to remind them of "the rule of the game" - referring to an announcement he made several years ago that provincial police chiefs and local military commanders in regions affected by uncontrolled fires would be sacked as part of their accountability.

"This week, I am going to Singapore and Malaysia, but last week there was a news headline about Indonesian forest fire (in overseas media)," he said. "We would be embarrassed if we cannot tackle this. They are happy that they didn't get haze in the past four years."

He pointed out that the situation regarding Indonesia's forest and plantation fires this year, although showing much improvement from the 2015 fires, is worse than last year.

In 2015, raging fires in Riau, other parts of Sumatra and in Kalimantan spawned choking haze that blanketed parts of Singapore and Malaysia.

The total loss incurred from the 2015 fires was valued at 221 trillion rupiah (S$21.6 billion) and about 2.6 million hectares of lands were engulfed in fires, Mr Joko reminded his audience on Tuesday.

"However small the fire is, action must be taken quickly," he added. "If the fire grows bigger, especially in peatland, it would be difficult to douse."