JAKARTA (BLOOMBERG) - Indonesia said it will crack down on trash imported from the world's richest countries after closer inspections showed it's increasingly the recipient of toxic waste materials.

The authorities at ports have boosted checks after a random inspection in May led to the discovery of more than 80 containers containing illegal waste from the United States, Australia and Europe. One of Australia's richest men has been dragged into the furore after a media report alleged a company he owned was responsible for a shipment that contained materials considered toxic under Indonesian law.

"This is a serious problem," Mr Deni Surjantoro, deputy director of communications at Indonesia's customs department, said in an interview.

Indonesian authorities are now planning tougher measures against companies caught importing illegal waste, and will announce them as early as this week, he said. The government will also partially identify companies involved in the illegal trade, he said.

While toxic or contaminated materials have been found in containers from the US, Germany, Hong Kong and Australia, the US had been identified as the worst offender, Mr Surjantoro said.

He said the problem began after a change in policy in China, which had been the world's leading importer of recyclables. China last year began to restrict, and in some cases ban, imports on environmental grounds.

The Sydney Morning Herald and The Age newspapers reported last week that Visy Recycling, a company owned by billionaire Anthony Pratt, was the exporter of a container that had been impounded in the Indonesian port of Batam. The shipment reportedly contained plastic waste, which is regarded as toxic in Indonesia. Visy didn't reply to requests for comments, according to the newspapers, and didn't immediately respond to a query by Bloomberg sent via its website. 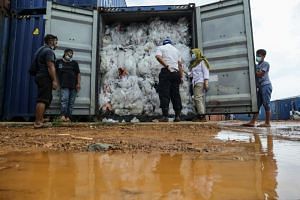 Indonesia to send back 49 containers of trash to developed countries

Importers of waste have 90 days to return the shipments to the countries of origin from the day of arrival, Mr Surjantoro said. Failure to comply will result in licences being revoked, and the importers will face investigations, he said.

Last month, Malaysia announced it was sending more than 3,000 tonnes of scrap plastics back to countries including Australia, Canada, Japan, Saudi Arabia, and China. The Philippines took similar action in June, returning dozens of containers of waste deemed illegal back to Canada.