JAKARTA - President Joko Widodo has pledged to tackle Indonesia's widening current account deficit, which is seen to reach about US$25 billion (S$34 billion) this year, by chasing tourism dollars and increasing the use of local biodiesel to help reduce overall fuel imports, a statement posted on the Cabinet secretary website revealed.

Besides a net cash outflow and a dumping of bonds and stocks, a current account deficit is also affected by trade deficits, when the country's import of goods and services exceed exports.

The President, who is also known as Jokowi, met Indonesian tycoons on Tuesday (Aug 28) to discuss global economic uncertainties that are affecting the emerging markets, including Indonesia. He also shared with them some of the government's strategies in dealing with these risks.

Mr Joko stressed that there is tremendous uncertainty for the world economy.

"People were concerned about (the impacts from) the China-United States trade war, and now we have one more, the crisis in Turkey. We don't know what could be the next trigger to bring about even more uncertainties for the global economy," Mr Joko was cited as saying in the statement, which was released after his meeting with the business leaders.

Turkey's current financial crisis - which has seen the lira fall close to 40 per cent against the US dollar - has created jitters among global investors who shifted their investments away from the emerging markets, including Indonesia.

Indonesia, which has been relying on foreign investment inflows to fund its current account deficits, saw a net US$3.8 billion pulled out of bonds and stocks this year, according to Bloomberg figures. And after recording a surplus for three years in a row, Indonesia posted a trade deficit of US$1.02 billion in the first half of 2018, official figures show.

The widening current account deficit has lead to a depreciation of the country's currency.

Indonesia's rupiah has dropped more than 7 per cent this year against the US dollar.

This has prompted Bank of Indonesia - the central bank - to raise interest rates more than three times this year, pushing up the cost of housing loans as well as affecting consumer purchasing power.

This, analysts say, could hurt Mr Joko's popularity ahead of next year's presidential election, where he is seeking re-election. 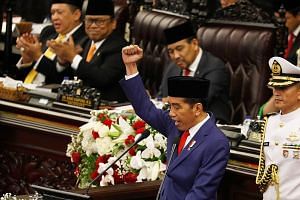 Economists say although the crisis in Turkey bears a striking similarity to the collapse of Asian currencies in 1997, the emerging markets have evolved since the Asian Financial Crisis and their economies have become more insulated from the risk of contagion.

Mr Joko blamed long-time problems that he said were not seriously addressed by previous governments for the current account deficit, and cited the lack of a push to use biodiesel in the country as an example.

Indonesia is the world's largest palm oil producer and has recently issued a regulation to expand the use of 20 per cent palm oil-based - blended biodiesel (B20) - to all sectors.

This will take effect on Saturday (Sept 1).

The government has also said it will raise the required biodiesel content to 30 per cent (B30) next year in the transportation sector, a year earlier than initially planned.

Such a move could save the state coffers as much as US$11 billion in oil imports, Mr Joko was cited as saying in the statement.

The statement also underlined Indonesia's increased focus on developing the tourism sector, with the government optimistic of achieving this year's target of attracting 17 million foreign visitors, up from 14 million in 2017.

"Thailand could get 34 million foreign visitors. Why can't we achieve at least the same? I think (going forward) we can do it," Mr Joko said.

Indonesia boasts a wide range of natural scenery, such as Lake Toba in Sumatra, but a lack of infrastructure spending had impeded the growth of tourism to the country. Lake Toba occupies the caldera of a large ancient volcano 900m above sea level.

As part of that infrastructure push, Mr Joko wants to build 10 new Balis, and attract more affluent travellers from China, which is on track to become the biggest tourist market for Indonesia.

Recent drives in upgrading smaller airports located close to tourist attractions, including one near Lake Toba, have helped Indonesia to be well-positioned to achieve its ambitious target to get 17 million foreign visitors this year and 20 million in 2019.